Nils Politt of the Bora-Hansgrohe team prevailed in the 159.4-km ride from Saint-Paul-Trois-Chateaux to win stage 12 at the Tour de France 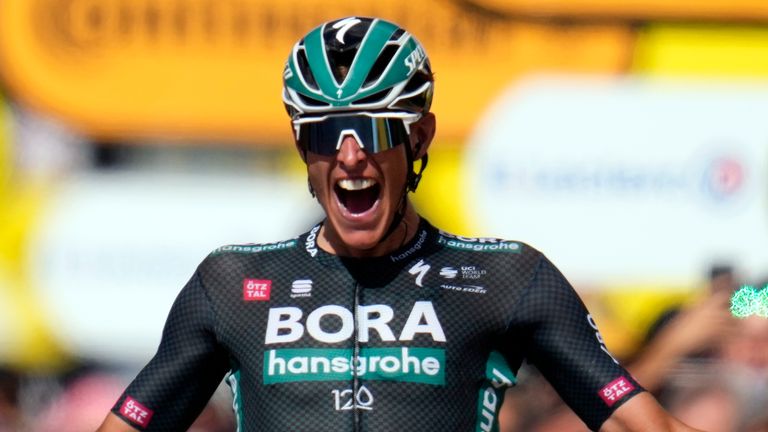 Nils Politt celebrates as he crosses the finish line to win the 12th stage of the Tour de France. (AP Photo/Daniel Cole)

Accustomed to settling for second, Nils Politt struggled to believe victory was his when it finally came at the Tour de France.

After dropping his last remaining rivals on the road leading to the city of Nimes in southern France, the German rider hit his helmet several times and shook his head as if to say, ‘I can’t believe it’.

After the strange feeling sank in, with the finish in sight, Politt made a big heart sign with his hands and crossed the line on his own to post only the second stage win of his professional career.

Politt was part of a larger group that jumped out of the main pack in the early stages of the windy 159.4km stage 12 between Saint-Paul-Trois-Chateaux and Nimes. 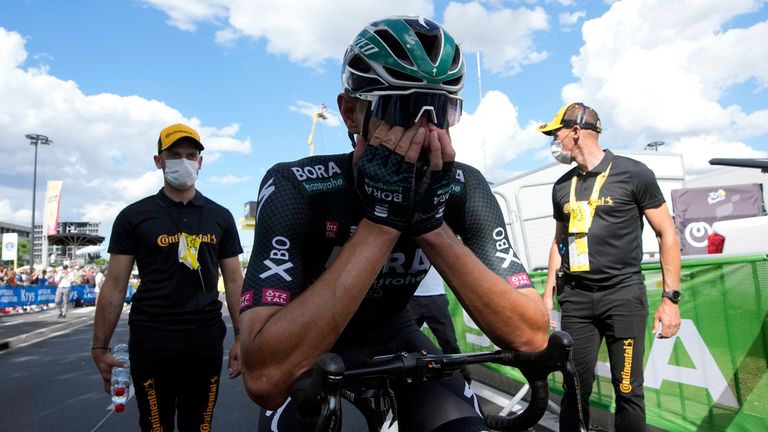 Politt can barely believe it as he wins Stage 12 (AP)

The German rider from the Bora-Hansgrohe team had attacked with three other rivals from the 13-man breakaway group about 40 kilometres from the finish. He then went solo with 12 kilometres left with a sudden acceleration that was left unanswered.

“There were quite a lot of sprinters in our group, so I had to make the race hard and attack quite early,” Politt said. “I made first attack. I gave everything. To finish solo is unbelievable.”

A one-day classic specialist, the 27-year-old Politt has posted many honorable results at prestigious events in the past, including a runner-up finish at Paris-Roubaix two years ago. But despite his combative skills, Politt had never tasted victory on the biggest stage.

“Winning a Tour stage is a dream, it’s really the best moment of my career,” he added through a translator. “It’s my second win, but here it’s different.”

Politt’s victory brought comfort to his team just hours after leader Peter Sagan withdrew from the race before the start of the stage due to a knee injury. Race leader Tadej Pogacar rode with all other main contenders well behind the breakaway and crossed nearly 16 minutes behind the winner. With none of the breakaway riders a threat in the general classification, the defending champion enjoyed a quiet day in the peloton after strong crosswinds created splits in the early stages.

There was no significant change in the overall standings. Pogacar kept his 5:18 lead over second-placed Rigoberto Uran, with Jonas Vingegaard in third, 5:33 off the pace.

Friday’s stage 13 to the medieval city of Carcassone is another flat trek suiting sprinters. Veteran sprinter Mark Cavendish will be chasing a 34th career stage win that would put him level with five-time Tour winner Eddy Merckx’s all-time record.