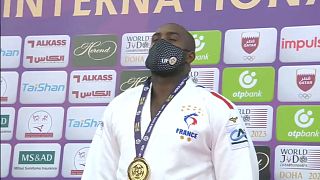 The heavyweights lined up for the final day of the Doha Masters, with 10-time World Champion Teddy Riner happy to be among them.

“This competition is wonderful,” he said. “The organization, the country have done a beautiful competition. Very safe for all the athletes and for all of the members of the International Federation. So a big thanks to the country of Qatar and to the organisers.”

And France’s double Olympic champion was to be our man of the day, powering his way to his fourth masters gold. Riner breezed through the preliminaries before claiming the scalp of Inal Tasoev from Russia in the final.

Madeleine Malonga is our woman of the day. The French judoka defeated Japan’s Hamada Shori in the -78 kilo final of the Tokyo World Championships back in 2019 and she repeated the feat in Doha. Malonga scored early with an osoto gari for waza-ari and kept the lead for the remainder of the contest. Khaled Ben Hamad Al Attiyah, President of the Qatar Taekwondo, Judo and Karate Federation, awarded the medals.

It’s the year of the Olympic Games and it’s important for me to win every fight.

“I feel good, very, very good because it was a very important day to win,” said Malonga after her victory. “It’s the year of the Olympic Ga mes and it’s important for me to win every fight.”

In the over 78 kilos category it was yet another gold for France – Romane Dicko defeating Azerbaijan’s Iryna Kindzerska by securing osaekomi. Nasser Al Khelaifi, the President of Paris Saint Germain and Chairman of Bein Media Group, presented the medals – making it a remarkable three golds for France.

And in the -100 kilo category, Varlam Liparteliani claimed his third masters gold, scoring a lightning-fast waza-ari after just 15 seconds in his final against Azerbaijan’s Zelym Kotsoiev. Armen Bagdasarov, Sport Director of the International Judo Federation, gave the Georgian his gold.

And an ippon from Jorge Fonseca was our moment of the day.

So a great start to the season – next stop Tel Aviv!