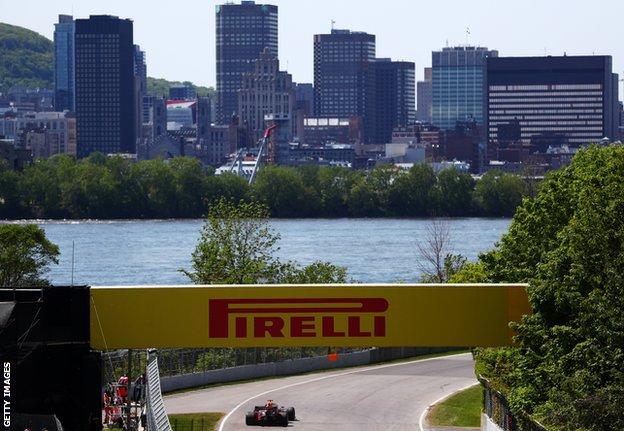 The Canadian Grand Prix has been cancelled and will be replaced on its 11-13 June date by a race at Turkey's Istanbul Park track.

It is the second successive year the Montreal event has been cancelled because of the coronavirus pandemic.

Travel restrictions made it impossible to enter Canada without a mandatory 14-day quarantine, said an F1 statement.

Meanwhile the contract for a race on Montreal's Circuit Gilles Villeneuve has been extended by two years to 2031.

Canada is experiencing a rise in cases, with Ontario – neighbouring province to Quebec – particularly badly affected.

Turkey returns for a second successive year as a stand-in race because of disruption caused by the pandemic.

Last year, it returned to the calendar for the first time since 2011, and was the event at which Lewis Hamilton clinched his record-equalling seventh world drivers' title.

F1 president Stefano Domenicali said: "While it is disappointing we cannot be in Canada this season, we are excited to confirm that Turkey will host a grand prix in 2021 after an amazing race last season.

"I want to thank the promoter and authorities in Canada for all of their efforts in recent weeks but the travel situation made our plans impossible."

How is it looking for other races?

Last season's calendar was almost entirely based in Europe, apart from a brief trip to the Middle East at the end of the year.

This year, F1 has planned a record 23-race schedule with all the usual events, and the addition of a new event in Saudi Arabia, but the abandonment of Canada raises further questions about other long-haul races later in the season.

These fall into two broad categories – events in countries where the virus is under relative control but the government is using immigration restrictions as part of its model to keep it so; and nations that are struggling to contain the virus, or where it is running out of control.

Singapore, Japan and Australia all fall into the first category, with the added complication that the Japanese government has imposed emergency restrictions in the capital Tokyo and second city Osaka as a result of a spike in cases.

These restrictions are raising questions about the viability of holding this summer's Olympics, which have already been delayed from 2020.

Singapore and Japan's races are scheduled for consecutive weekends on 1 and 8 October.

The Australian Grand Prix has been postponed from its season-opening slot in March until 21 November, but the country would probably have to waive its strict immigration restrictions, at least for F1 personnel, if it was to hold a race.

Of the countries struggling to contain the virus, Brazil is the one whose race is most at risk, and its destiny may hang on whether the UK government keeps it on its red list of countries, meaning travellers have to quarantine in hotels for 14 days on their return to Britain. Eight of the 10 F1 teams are based in the UK so under those conditions the grand prix would probably be untenable.

F1 faces a similar situation, to a lesser extent, in Mexico.

Snooker-tastic!: The heroes and villains that helped snooker reach it's glory yearsHave an evening in with films on iPlayer: From action to romance, there's a movie for everyone
Source