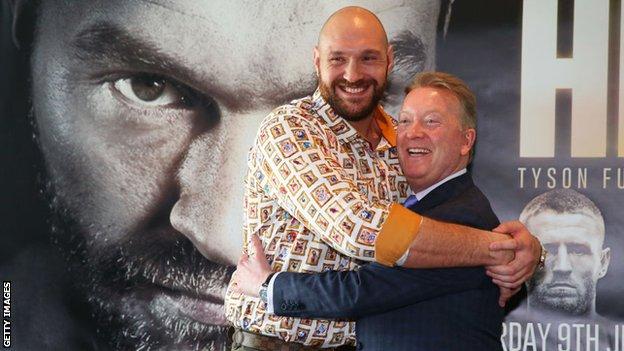 The bout was set to take place in Saudi Arabia on 14 August but fell through when a US judge ruled Fury must honour a contract and fight Deontay Wilder for a third time.

They will now meet on 24 July – scuppering the Joshua fight.

"The whole process has been a mess," said Warren, Fury's UK promoter.

The staging of the long-awaited Joshua-Fury fight, which would have seen the pair contest all four world titles for the first time in the sport's history, has been a protracted affair.

Fury, 32, won the WBC world heavyweight title from Wilder in a rematch in February 2020 after an initial draw, setting up the chance of a unification fight with Joshua, 31, the WBO, IBF and WBA champion.

A third Wilder fight had been agreed for 2020 – handled by Fury's American promoter Bob Arum – but delays caused by the Covid-19 pandemic prompted Fury to walk away from that, before the judge's intervention placed it back on the agenda.

That ruling came a day after the Joshua fight appeared to have been confirmed.

Arum has said Wilder will not walk away from the fight to let Joshua v Fury go ahead, and feels the Joshua fight could still take place in "November or December".

Warren said some blame for the confusion lay with Joshua's promoter, Eddie Hearn, but admitted: "Let's be honest, our side has been just as bad.

"It'd have been better if everyone had kept quiet until it was all signed and over the line. Instead we got stuck in a cycle where their side said something and our side had to respond. Too many agendas and egos took over.

"Boxing needs to learn from this process."

Fury's father, John, has said he is worried the Briton could lose his third meeting with Wilder. He told BT Sport he had told his son to give up his WBC belt and focus on fighting Joshua instead.

"It's easy to say throw the belt in the bin, but it has no bearing whatsoever on the judgement cast in the arbitration case. The judge ruled that Tyson must face Deontay Wilder a third time, title or not.," Warren said.

"The situation is the situation, everyone is frustrated but we are bound by the arbitration ruling so Tyson has to fight wilder, and be at his best, forget the BS, get the win and then knock out AJ in December.

"And, for anyone asking why this fight was so quickly arranged, the terms of the fight were agreed in the contract for the second fight. This was as simple as signing the paper."