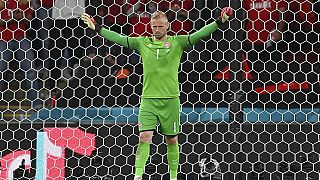 UEFA has opened disciplinary proceedings against England after a laser pointer was shone into the face of Denmark keeper Kasper Schmeichel during the Euro 2020 semi-final at Wembley.

But TV cameras also caught a green light being shone on Schmeichel’s face just before the crucial penalty shot. Schmeichel saved the spot-kick but Kane then scored on the rebound.

A statement issued on Thursday by the European football governing body read: “Disciplinary proceedings have been opened following the UEFA EURO 2020 semi-final match between England and Denmark (2-1), played on July 7 at Wembley Stadium, London.

“The case will be dealt with by the UEFA Control, Ethics and Disciplinary Body (CEDB) in due course.”

England is also charged over “disturbance” caused by its supporters after some fans booed during the Danish national anthem, and over fans setting off flares inside Wembley.

The game on Wednesday night was marked by several controversial moments, including the penalty awarded to England after Raheem Sterling went down under a challenge.

Despite this, and the looming prospect of a fine from UEFA, the team was jubilant ahead of a final that could see England take home its first ever European Championship trophy.

“I’m so proud of the players,” coach Gareth Southgate told reporters after the final whistle. “It’s an incredible occasion to be a part of, the fans were incredible all night.”

Danish counterpart Kasper Hjulmand congratulated Southgate on his “outstanding” leadership, though he added: “It makes me angry that this is the way the game got decided… We are very disappointed.”