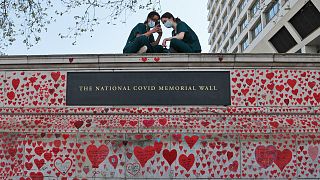 The U.K. has recorded its highest daily coronavirus cases since late February suggesting the Delta variant, which was first detected in India, is spreading widely across the country.

Cases have been rising over the past few weeks as a result of the Delta variant. The concern is the increase will pressure the health system once again.

Another 123 people entered the hospital with symptoms related to coronavirus, taking the total to 1,024. The number of people dying after testing positive for COVID-19 rose by six to 127,860 confirmed deaths.

Health experts hope the rapid rollout of vaccines will break the link between new cases and deaths. So far, a large proportion of the people infected are within the less vulnerable younger age groups, many of whom have yet to receive a first dose.

British Prime Minister Boris Johnson said it was too early to say if England’s lockdown can end on June 21 as data on whether the vaccine rollout offers enough protection from the rapid spread of the Delta coronavirus variant is still being assessed.

“On Monday… we’ll have a look at where we are. I think what everybody can see very clearly is that cases are going up, and in some cases hospitalisations are going up,” Johnson said on Wednesday.

“What we need to assess is the extent to which the vaccine rollout, which has been phenomenal, has built up protection in the population in order for us to go ahead to the next stage. And so that’s what we’ll be looking at.”

The COVID-19 Delta variant is around 40% more transmissible than the Alpha (UK) variant, the UK health secretary said on Sunday.

The spread of this more transmissible variant is thought to be responsible for the catastrophic rise in cases, hospitalisations and deaths in India weeks ago.

The health secretary Matt Hancock said that one jab of a COVID-19 vaccine appeared to be less effective against the Delta variant, encouraging people to go for their second booster shots.

A recent UK study for instance showed that one dose of the Pfizer-BioNTech and AstraZeneca vaccines were less effective against the Delta variant than the Alpha variant, which first emerged in the UK.

Hancock added that most of the hospitalisations in the country were among people who were unvaccinated.

In France, 31 cases of the Delta variant in southwestern Landes region are being closely tracked by authorities who said on Friday that there were likely more cases as not all COVID-19 cases are sequenced.

The Delta variant is the fourth “variant of concern” identified by the World Health Organization using a new naming system with Greek letters of the alphabet. It has been identified in 62 countries globally, according to the WHO’s latest epidemiological update.