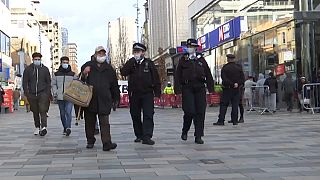 British Prime Minister Boris Johnson has unveiled plans to open shops and hairdressers by April 12, and lift almost all COVID restrictions in England by June 21, if conditions allow.

Bars, restaurants, gyms, schools, hair salons and all non-essential shops were closed in England on January 5 as part of the country’s third lockdown to curb the spread of COVID infections.

Johnson spoke to Parliament on Monday setting out his government’s “one-way road to freedom”.

UK aiming to vaccinate every adult by end of July, government says

Johnson insists this time he will follow “”data, not dates” after his government was accused of reopening the country too quickly after the first lockdown in t he spring.

But he is under pressure from some of his own MPs, who are pushing for a quicker end to lockdown to revive the economy.

Johnson says the government is taking a “cautious” approach and each stage will depend on the continuing success of the vaccine rollout.

The government declared on Sunday that every adult in the country would be offered their first jab by the end of July, at least a month earlier than its previous target.

The UK has been recording on average 11,000 daily cases of COVID-19. The country has recorded a total of more than four million cases and over 120,000 deaths since the beginning of the pandemic.