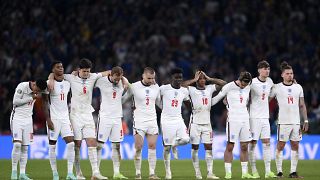 English players during the penalty shootout of the Euro 2020 final match between England and Italy at Wembley stadium in London, July 11, 2021.

A man who posted racist abuse online after the EURO 2020 final has been arrested, London’s Metropolitan Police said on Monday.

The man, in his 50s, lives in Hounslow, in south-west London. He was arrested on July 17 for posting “racist abuse in a Facebook video” after the July 11 EURO 2020 final, the Met Police said.

He has since been released “under investigation as enquiries continue.”

“We’re working to identify and arrest those responsible for criminal behaviour linked to EURO 2020,” police added.

More than 260 people were arrested across England for football-related incidents in the 24 hours after the final which saw Italy beat the Three Lions to be crowned European champions, the National Police Chief’s Council (NPCC) has said.

The number of football-related incidents during the month-long competition reached 2,344 — more than a third of which was recorded in the day following the final — with 630 arrests carried out.

“These numbers are a significant increase compared to the criminal incidents see during the previous tournaments including the 2018 World Cup and Euro 2016,” the NPCC said in a statement.

Black players on the England team, including Marcus Rashford, Jason Sancho and Bukayo Saka, have been targeted with a torrent of abuse released on social media following the country’s defeat.

A dedicated police investigation team was formed to analyse the posts and four people had been arrested by July 15.

Dozens of data applications have also been submitted to social media companies, according to the NPCC.

In May, football players in the UK led a weekend-long social media boycott to protest racist abuse on the platforms.

Eight people were arrested later in the month as part of an investigation into racist abuse targeted at a Premier League player.