Seamer routed Southern Vipers by taking a hat-trick in the Rachael Heyhoe Flint Trophy ahead of her first international call-up; Natasha Farrant is also included in 17-strong squad to face India, while Nat Sciver is confirmed as vice-captain to Heather Knight across all formats 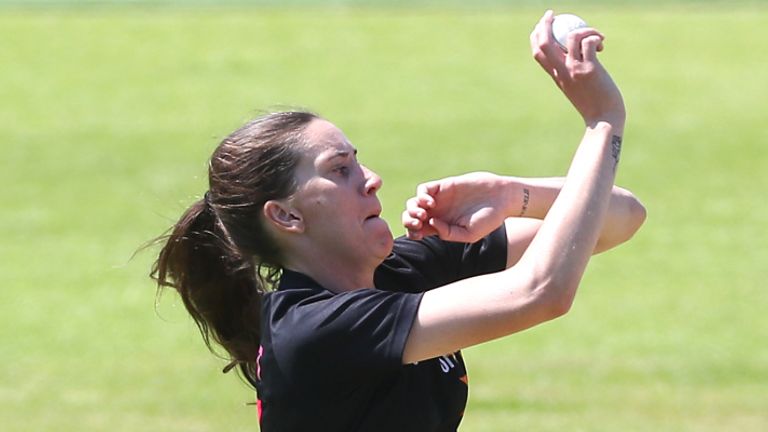 Uncapped Emily Arlott has been included in England Women’s 17-strong squad for the Test against India, just days after taking a hat-trick for Central Sparks.

Seamer Arlott, 23, bagged 5-29 – including four wickets in an over – in front of England head coach Lisa Keightley on Saturday as Sparks dismantled defending champions Southern Vipers in the Rachael Heyhoe Flint Trophy.

She is joined in the squad for the Test, which you can watch live on Sky Sports Cricket from 10.30am on Wednesday June 16, by fellow bowler Natasha Farrant, who returned to the international frame on the tour of New Zealand earlier this year having secured one of the 41 full-time regional contracts introduced into the women’s game in 2020.

Seamer Anya Shrubsole missed the trip against the White Ferns after picking up a knee injury and so surrendered the vice-captaincy to Nat Sciver, who has now been confirmed as Heather Knight’s number two across all forms of international cricket.

The all-rounder stepped in as captain for the injured Knight as England Women clinched a 3-0 T20 series sweep of New Zealand in March having already taken the ODI series 2-1.

Announcing the squad, Keightley said: “It’s been hard to pick a squad given the balance of needing cover in a COVID world while wanting to give players as much chance as possible to play cricket.

“We want players to have opportunities out in the middle so we’re looking to reduce our numbers slightly ahead of the Test to give the non-selected players that chance.

“I’m really excited by the summer ahead. We’ve been working really hard across the last 10 weeks, India are a strong side and it’s the beginning of a two-year journey for us that takes in two ICC World Cups, an Ashes and the Commonwealth Games.”

The Test squad is likely to be trimmed ahead of the Test match to allow non-selected players to play in the next round of the Rachael Heyhoe Flint Trophy.

Watch the Test between England Women and India Women live on Sky Sports Cricket from 10.30am on Wednesday June 16.