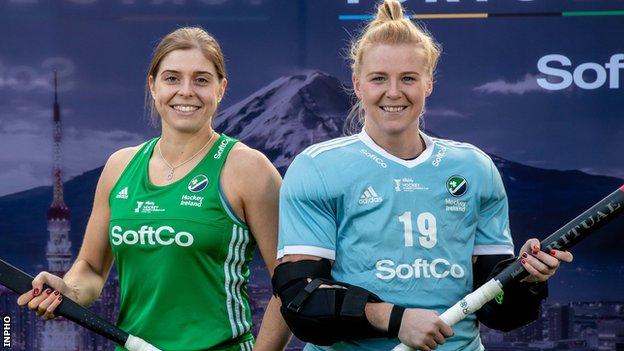 Mullan and McFerran are two of eight Ulster players selected

Eight Ulster players have been named in the panel of 23 from which the Ireland women's hockey squad for next summer's Olympics will be selected.

Ards' uncapped Zara Malseed and Beth Barr, who was part of the squad that beat Canada to clinch qualification for the Games in Tokyo, are included.

Fifteen of the 18 World Cup silver medal winners have been named, but Gillian Pinder, who scored the penalty run-in against Spain in the World Cup semi-final, has been left out.

Katie Mullan says every member of the Ireland squad is "buzzing"

Head coach Sean Dancer will pick a squad of 16 players and two reserves for the rescheduled Olympic Games from the panel that was named on Thursday.

It is a huge year for the Irish women who, before the Olympics, have the European Championships in Amsterdam in June.

That competition now doubles up as the only qualification event for the 2022 World Cup, which will be hosted jointly by the Netherlands and Spain, with the top six countries from the continental championship qualifying for the World Cup.

"This has been a tough process, reducing the number of athletes on the panel," said Dancer.

"We've seen some new talent come in and make an impression, which is a great sign for the longer-term vision of the sport in Ireland.

"I'm confident we have a really good mix of experience and talent in this panel. They've all been working incredibly hard and it's been quite challenging over the past number of months with restrictions.

"I'm looking forward to the next few months and excited that we're getting closer to Tokyo 2021."