South Korea’s A Lim Kim birdies the final three holes to claim her maiden major title at the US Women’s Open, her first tournament in the United States; Amy Olson shares second with world No 1 Jin Young Ko 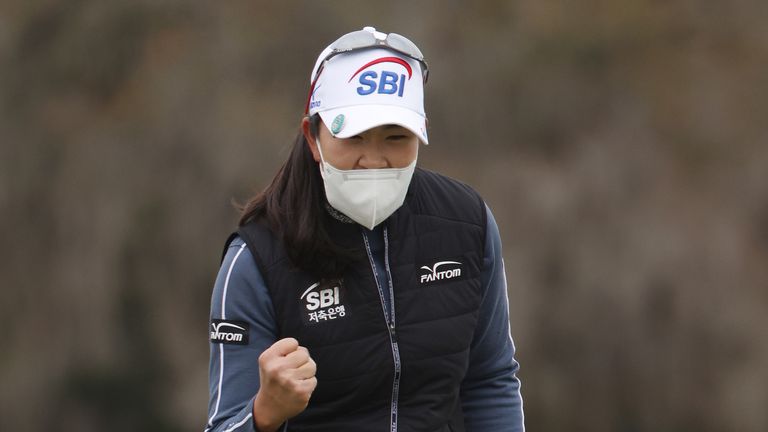 The best shots and key moments from the final round in Houston, where A Lim Kim produced a stunning finish to snatch a one-shot victory and her first major.

South Korea’s A Lim Kim produced a spectacular finish to clinch a shock one-shot victory at the US Women’s Open in Houston.

Kim, playing her first event in the United States, betrayed the freezing conditions and another tough USGA set-up at The Champions Club to match the best round of the tournament, a 67 which she capped with three consecutive birdies.

Her performance eclipsed a similar finale from world No 1 Jin Young Ko, who birdied 16 and 18 for a 68 which would ultimately earn her a share of second place with a valiant Amy Olson. Kim birdied the last three holes to win on three under

Long-time leader Hinako Shibuno holed a monster birdie putt at the last to end a disappointing day with a big smile, while Olson defied a family tragedy to stay in contention until Kim’s late burst swept her to victory.

After the final round was curtailed by heavy rain and thunderstorms early on Sunday, play resumed with the field wrapped up against the elements, and Kim made a big move with three birdies in four holes in an outward 33.

Shibuno relinquished her lead with bogeys at the second and seventh, while Olson hit back from three straight dropped shots with back-to-back birdies at the fifth and sixth, an inspired performance having had to deal with the sudden death of her father-in-law on Saturday.

If Olson had checked the leaderboards, something she is reluctant to do, she would have seen she was the outright leader when she boarded the 12th tee after Shibuno made further mistakes at the 10th and 11th, where Kim had also bogeyed to slip back to level par.

But Kim then picked the 16th tee to launch the first of three of the best iron shots of her career, knocking her tee shot to a couple of feet to set up an easy birdie before hitting her approach to the 17th green even closer.

The world No 94 was not finished there, and, after another arrow-straight drive down the final fairway, Kim clipped another pure iron to eight feet and held her nerve to judge the birdie putt to perfection, getting her into the clubhouse on three under par. Ko’s flying finish would come up a shot short as she settled for a podium finish alongside Olson, who left herself needing a birdie, birdie finish to tie when she dropped her fourth shot of the day at the 16th, while Shibuno bogeyed 17 to all-but seal the deal for Kim.

The South Korean’s excitement got the better of her as she dropped her mobile phone into her golf bag, and her victory was confirmed when Olson could not hole out from the fairway at the 18th, although both her and Shibuno holed lengthy putts for birdie to end the final major of a troubled year on a high note.

“I’m very honoured to win the 75th US Women’s Open,” Kim said. “I still can’t really soak in that I’m the champion, but it feels different winning the tournament here.

“Back in Korea the style and the environment is different. But I’m really glad, and through COVID-19 we had a lot of difficulties, but glad we had the US Women’s Open held in Houston. It was a great win. I love this golf course, love this environment. I want to actually put a tent up here and stay a few more days!”

Despite her huge win, Kim did not confirm whether she would become a full-time member of the LPGA Tour, something she will think about when she returns to her homeland for the Christmas period.

“I just need some more time to think about it,” she added. “It’s just so overwhelming just winning this tournament. Once I go back home I’ll think about it and see, just go from there.”

Olson signed for a 72 to finish on two under, by far her best result in a major, with Shibuno firing a 74 and finishing as the only other player under par for the tournament.

Moriya took bragging rights in the Jutanugarn family as her closing 74 was just enough to finish a shot ahead of sister, Ariya, but Lydia Ko was unable to mount a final-day charge and slumped to five over after 11 holes before parring in to stay at five over for the week.