Keegan Bradley holes out from 115 yards for an eagle-two at his final hole to reclaim a share of the lead with Sam Burns at the Valspar Championship. Watch the weekend action live on Sky Sports Golf. 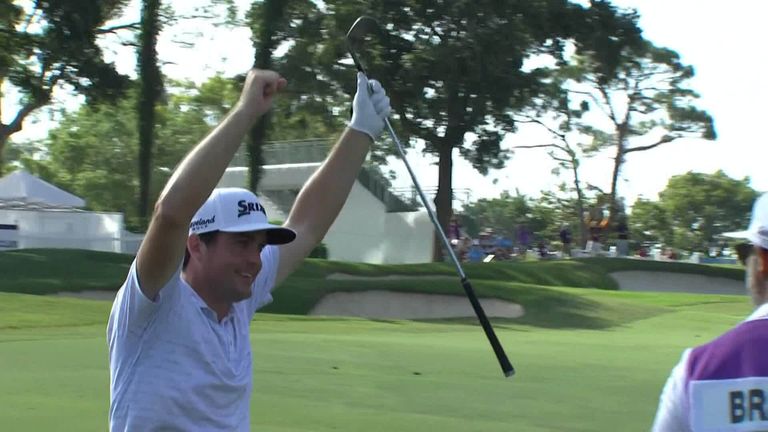 Keegan Bradley holes a 115-yard wedge for a spectacular eagle-two as his final hole to earn a share of the lead with Sam Burns at the Valspar Championship.

Keegan Bradley regained a share of the lead in spectacular style as he closed out his second round of the Valspar Championship with an eagle-two in Florida.

Bradley, two shots clear overnight following his opening 64, found himself trailing by two when Burns made five birdies in six holes on the other side of the Copperhead Course at the Innisbrook Resort to race to 12 under par.

But former PGA champion Bradley produced the perfect response, clipping a wedge from 115 yards into the ninth that pitched a yard beyond the pin and spun back into the cup – a shot that “turned a good day into a great day”, according to the American.

Bradley had earlier began his second round with back-to-back birdies from six feet at 10 and 11 before dropping his first shot of the tournament at the 12th, where he pulled his approach left of the target and failed to get up and down.

He steadied himself with a resolute run of pars and holed a pair of 15-foot putts for birdie on the front nine to get his title challenge back on track, and his stunning finish capped a 66 and hauled him level with Burns at the top of the leaderboard.

“It was a fun day and what a way to finish. It was a blast,” said Bradley, without a win since edging out Justin Rose in a playoff at the BMW Championship in September, 2018. Sam Burns fired a 63 to hit the top

“I hit the shot and you can’t see it from where we are, so you kind of have to wait for a reaction and then when people put their arms up, normally that means it goes in. But, wow, what an exciting way to finish.

“Today’s round was definitely a lot tougher. I didn’t play as clean. But my birdie on six and eagle on nine really turned everything, turned it to kind of just a good day to something really good. So what a bonus that last hole was.”

Burns cruised to the turn three under for his second day before beginning his rapid rise up the leaderboard with a 20-footer for birdie at the 10th, and after he added another at the long 11th, he picked up a bonus shot at 12 when his splash-out from a greenside bunker dropped into the cup for a three.

He also birdied 14 and 15 before parring home to complete a 63, bettering Bradley’s opening round by one, and he did not realise he had kept a bogey off his card until a reporter pointed it out afterwards.

“There are going to be times in the rounds where it gets tough and I think in those moments just hanging in there mentally and just being ready for when it turns. So I know over the weekend there will be some challenges, and I’m excited for the opportunity.” 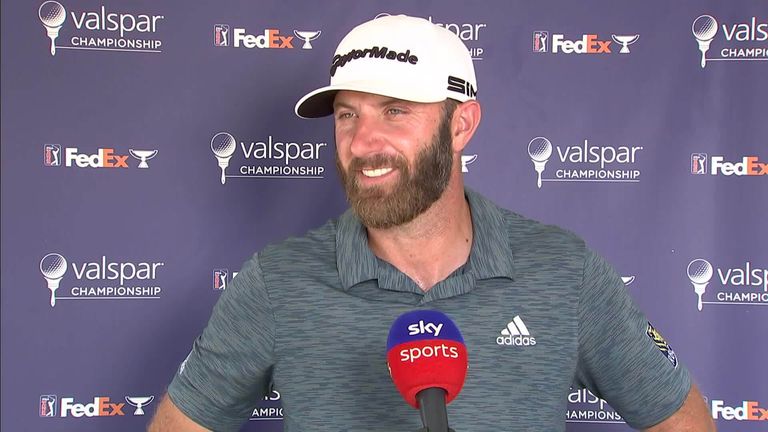 World No 1 Dustin Johnson believes he is ‘really close’ to hitting his best form as he reflected on an encouraging second-round 68 at the Valspar Championship.

The top two have a four-shot advantage over the chasing pack led by former US Open champion Lucas Glover (65), Charley Hoffman (66) and Max Homa (68), while England’s Tom Lewis powered into contention with a bogey-free 65 that lifted him to seven under.

“I’ll be happy to just keep playing well at the weekend,” said Lewis. “I don’t know what the weather’s like over the weekend, but if it’s like this, and if I can shoot in the 60s both times, I would be happy, and wherever that is, then that would be great.”

Lewis’ score was matched by 2011 Masters champion Charl Schwartzel, whose win at the Valspar Championship five years ago remains his last on the PGA Tour.

Tom Lewis is in contention after a 65

Paul Casey’s bid for a three-peat at Palm Harbor took a hit as he fired a scrappy 71 to stay at three under, nine off the lead along with world No 1 Dustin Johnson, who showed glimpses of his best in an encouraging 68.

World No 2 Justin Thomas could not get anything to drop on the greens and managed only one birdie all day in a 16-par 71, while fan favourite Phil Mickelson bogeyed two of the last three holes to miss the halfway cut by just one shot along with Ryder Cup team-mate Patrick Reed.