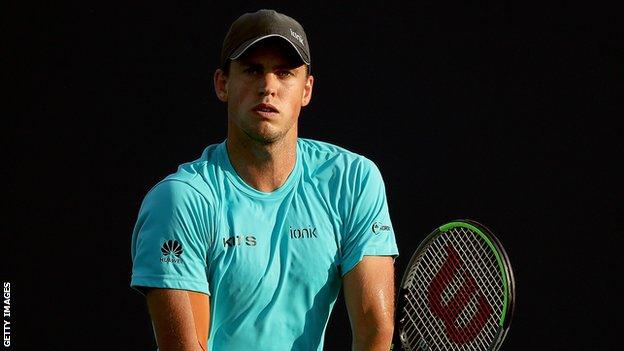 Pospisil has a career-high singles ranking of 25

Canadian Vasek Pospisil has apologised for an expletive-filled rant in a match at the Miami Open, during which he threatened to sue tennis organisers.

Pospisil ranted at the umpire after he was given a verbal abuse point penalty on set point in the first set of his 6-3 4-6 6-3 defeat by Mackenzie McDonald.

He accused ATP Tour chairman Andrea Gaudenzi of "screaming" at him in a players' meeting on Tuesday.

Pospisil, 30, said he was "truly sorry" he "disrespected the game I love".

The world number 67 had already smashed his racquet and launched a ball out of the court before his outburst.

"For an hour and a half yesterday, chair of the ATP, screaming at me in a player meeting for trying to unite the players," Pospisil said to umpire Arnaud Gabas.

"For an hour and a half. The leader of the ATP. Get him out here. Why am I supporting this?

"If you want to default me I will gladly sue this whole organisation."

Pospisil and Djokovic's planned breakaway association – the Professional Tennis Players Association – aims to increase the power of the players but has been met with opposition from governing bodies and other players.

In his apology the Canadian said the meeting with the ATP had "unnerved" him.

"I want to sincerely apologise for my behaviour on the court in Miami earlier today," Pospisil tweetedexternal-link.

"I underestimated the toll those emotions took on me until I stepped onto the court today. Again, I am sorry for my on-court behaviour and the language I used."