Notts opener hits sixth-highest Blast score ever; Worcestershire Royals displace Lancashire Lightning at the top of the Vitality Blast North Group after beating them by eight wickets; there were also victories for Durham, Birmingham Bears, Glamorgan and Kent Joe Clarke smote 11 sixes and six fours in his power-packed innings with a strike-rate of 209.23

Joe Clarke smashed 136 off 65 balls to power Nottinghamshire to the first win of their Vitality Blast title defence against Northamptonshire at Wantage Road.

Clarke produced the sixth highest Blast score ever and the best by a Nottinghamshire player as the visitors racked up 214-7. Northants vs Notts scorecard

Josh Cobb’s thunderous 62 from 32 deliveries gave the hosts hope of raining on Clarke’s parade, but they eventually fell 14 runs short, with Matt Carter’s figures of 1-15 vital.

The 2020 champions had failed to win their opening two fixtures, with a tie and a defeat, but bounced back in style to condemn their opponents to back-to-back losses.

Brett D’Oliveira’s unbeaten half-century lifted Worcestershire Rapids to the top of the North Group as they thrashed Lancashire Lightning by eight wickets to leapfrog their rivals.

Lightning, who went into the New Road clash with a 100 per cent record, were boosted by Jos Buttler’s knock of 55 from 46 balls, but Worcestershire seamer Charlie Morris took 2-25 to restrict the visitors to 132-4. Worcs vs Lancs scorecard

D’Oliveira (61no from 45) and Riki Wessels (40 from 27) then shared an explosive opening partnership of 79 off 53 balls that put the outcome virtually beyond doubt. 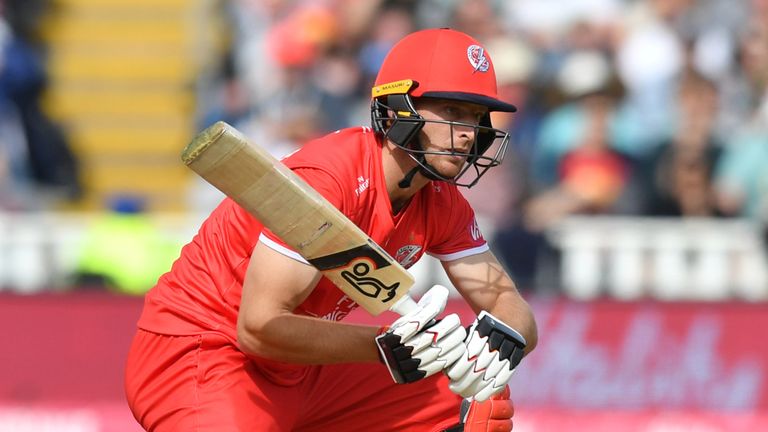 Jos Buttler struck 55 for Lancashire Lightning, but they were beaten for the first time in this season’s Blast

Matt Parkinson (2-32) accounted for both Wessels and Moeen Ali (9), but D’Oliveira and Jake Libby, with an undefeated 17, saw the Rapids home with 16 deliveries to spare.

Durham are now the only team in the group with a 100 per cent record after Ned Eckersley and Liam Trevaskis combined in a remarkable ninth-wicket partnership to snatch victory from the jaws of defeat against Leicestershire Foxes. Leics vs Durham scorecard

That looked certain to be a winning total when the visitors collapsed to 108-8 in the 14th over of their reply, with Lilley returning career-best T20 figures of 3-26 and Colin Ackermann taking 2-19.

But Eckersley, who finished unbeaten on 50 from 36 balls, found a staunch ally in Trevaskis (30no from 20) and the pair put on 62 as Eckersley struck Naveen-ul-Haq for six to secure a two-wicket victory.

The Falcons’ total of 160-8 was built around a 62-run partnership between Fynn Hudson-Prentice (41 from 22) and Brook Guest (24 from 21) before Carlos Brathwaite (2-24) got rid of both batsmen in successive deliveries.

Logan van Beek (2-29) then struck two early blows when the Bears replied, but 19-year-old Mousley, who hit 56 from 40 balls, led the visitors’ fightback.

In the South Group, a century partnership between Nick Selman and Marnus Labuschagne secured Glamorgan‘s first Blast victory of the campaign as they overcame Essex Eagles by seven wickets at Cardiff. Glamorgan vs Essex scorecard

Australia star Labuschagne also impressed with the ball, taking 1-17 in three overs after Will Buttleman (36 from 26) had given the Eagles a promising start.

But wickets fell at regular intervals after Buttleman’s departure, with Ruaidhri Smith (2-13) also helping to ensure that Essex could only muster 153-6.

Kent Spitfires held their nerve to win a thriller against Gloucestershire at Canterbury. Kent vs Gloucs scorecard

The visitors needed 10 off the final over, but Fred Klassen responded with two wickets from the first two balls, to give The Spitfires their third Vitality Blast win out of three, by five runs.

Gloucestershire had looked favourites after racing to 54-0, Chris Dent making 40 and Glenn Phillips 38.

Kent then reduced them to 125-5, but just as Billy Howell seemed to have tilted the balance back in the visitors’ favour he was out for 48, and they finished on 178-8.

Earlier Jack Leaning hit an unbeaten 81 from 51 balls as Kent recovered from 16-3 to reach 183-5. Daniel Bell-Drummond was the next highest scorer with 51, while David Payne took 3-30.