Tuaine Keenan and Fi Toner will also have scans on their respective lower leg injuries on Wednesday; all three players left the court on Monday night; Leeds Rhinos Netball have announced Wallam has had surgery and a timeline regarding her return will be confirmed 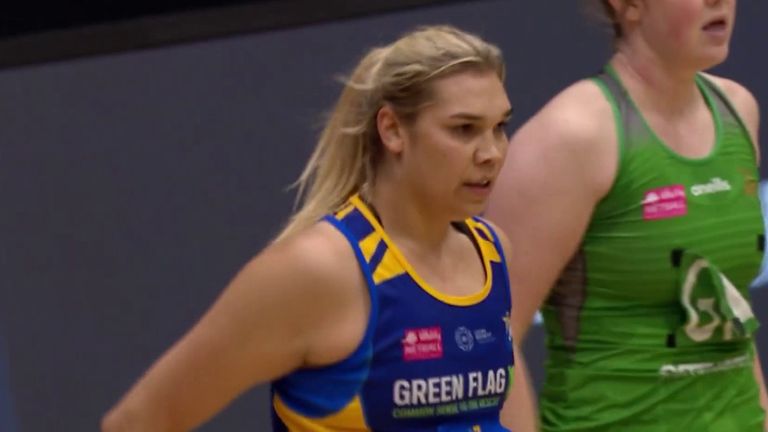 Donnell Wallam had enjoyed an excellent start to the season before her injury on Monday night, as had Tuaine Keenan and Fi Toner

All three players were forced to leave the court during the Vitality Netball Superleague’s second game of the season on Monday night.

The encounter, which saw Rhinos show their determination and only narrowly lose to Saracens Mavericks, proved to be a costly one for their high-performance director and head coach Dan Ryan.

In an injury update on Wednesday, Leeds Rhinos confirmed Wallam underwent surgery the day prior to her fractured radius, and a timeline for her recovery would be announced in due course.

It was also revealed new signing Keenan, who arrived after Madi Browne deferred her contract to the 2022 season, and vice-captain Toner, both need scans to determine the extent of their respective lower limb injuries.

Wallam’s entrance into the Vitality Netball Superleague was a much-anticipated one. The 6ft 2in shooter is a former Australian state basketball player and someone who arrived at netball late in her sporting career.

Her rapid introduction to the sport saw her win back-to-back titles with the West Coast Warriors in the Gold Industry Group West Australian league and be crowned the Jill McIntosh Medallist for two successive years.

Wallam finished the 2020 season with a league-high 1,013 goals, which equated to 430 more goals than any other player. She also thrived when the WA All-Stars mixed team faced West Coast Fever in an exhibition match.

She was pitted against the Australian Diamond, Courtney Bruce, and had a stormer. At the end of pre-season, Ryan told Sky Sports her improvement had already been significant.

“She’s been really amazing to work with, to be honest. She’s quite a blank canvas in terms of her knowledge and understanding and how well she knows the game,” he said.

“Just seeing her learn new skills and understand different concepts is great. Also seeing her develop physically in terms of her strength in the gym, and her footwork and movement is growing with every session.”

Wallam’s hard work, and of all within Ryan’s new Superleague side, were clear when they beat Celtic Dragons 65-35 on the opening night of the season.

Then, when they returned to court on Monday, they took on the Saracens Mavericks despite the injuries sustained to Wallam, Toner and Keenan.

The 43-39 result highlighted their determination and also the depth of talent within their ranks as Sienna Rushton and Paige Kindred, in particular, looked at home on a Superleague court.

The team’s next Vitality Netball Superleague encounter, which you can watch on the Sky Sports YouTube channel, is on Saturday against Surrey Storm at 12pm.