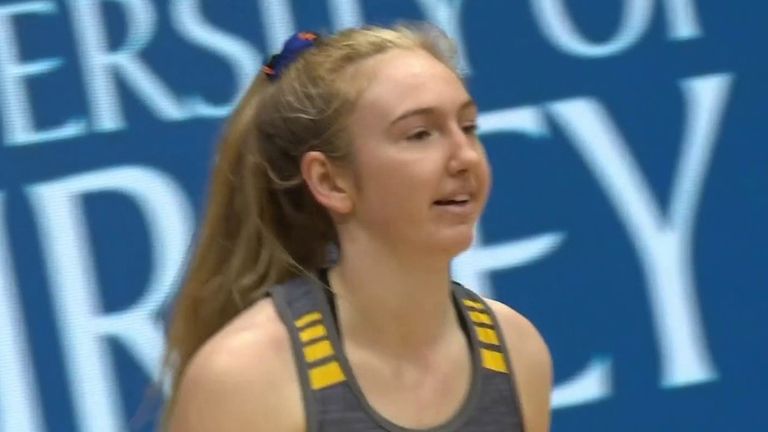 Leeds Rhinos Netball put a difficult week behind them to record their second victory of the Vitality Netball Superleague season, while Strathclyde Sirens highlighted their belief to beat Celtic Dragons.

The competition’s newest outfit, who announced the news of injuries to Donnell Wallam, Fi Toner, Tuaine Keenan and Brittany Coleman during the week, showed their determination to prevail over Mikki Austin’s side.

The contest was the first of four matches during a bumper day of netball in Wakefield, and after its conclusion, Strathclyde Sirens put aside an early line-up reshuffle to prevail over Celtic Dragons.

Rhinos’ result was built on a foundation of hard work and togetherness, and it highlighted their ability to turn the screw at exactly the right time.

From the start, Vicki Oyesola continued where she left off last weekend, as did the player of the match Sienna Rushton. The former turned over plenty of ball for her team, while Rushton looked incredibly comfortable in Rhinos’ shooting circle.

Rhea Dixon’s productivity at GA was another key factor in the creation of their early three-goal cushion. However, Storm stayed calm and they plugged away, with Yasmin Parsons setting their tempo through court.

A single goal separated the two teams after 12 minutes, and both head coaches decided to stick with their starting line-ups. The result was another goal-for-goal quarter before Storm turned up the heat.

They took full advantage of Alima Priest announcing herself in their defensive end and converted her turnovers well, by finding Karyn Bailey nicely. Storm held a three-goal advantage with seconds remaining of the half, before Rhinos used the final play to scratch one of those goals off.

With the contest poised at 25-23, both head coaches made changes and Mikki Austin decided the time was right for her first appearance of the season.

She put on the centre bib and moved Parsons to WA while Dan Ryan changed his wings; Rosie Harris came on at WD and Amelia Hall at WA.

Neither team line-up took a backward step, but Rhinos were the ones who pressed their foot on the accelerator. They used the third set of the 12 minutes to turn around their deficit and lead 35-32 going into the final quarter.

With the wind in their sails, the combination of Jade Clarke, Hall and Dixon coming to the fore, they closed the contest out well while Storm ran out of time to try and reel their opponents back in.

“We’ve had such a tough week and we’ve had to overcome such adversity,” Rushton said, after their 50-44 victory.

“To come out with that result at the end, we’re just all in such high spirits. We really pushed on from where we were at half-time and that shows the camaraderie and spirit we have in the team.”

Strathclyde Sirens secured their second consecutive victory of the season with a convincing 52-35 win over Celtic Dragons.

The Dragons were condemned to a third successive defeat, but it was a much-improved display from Tania Hoffman’s side, who were in contention until the Sirens stamped their authority on the contest in the closing stages.

Lynsey Gallagher was forced off with injury after two just minutes which pushed Sirens into an unscheduled attacking reshuffle. However, Emma Barrie slotted in seamlessly at shooter with Bethan Goodwin moving out to GA and as they established a 13-10 lead at the end of the first quarter.

Taylor Cullen produced a series of vital interceptions early on, and coupled with Sirens’ attacking dynamism, Celtic Dragons appeared in danger of being blown away. All the girls have the belief that we can really challenge this season. Every game we’re going out and looking to improve upon our last game, and that’s what we did.

However, the Welsh side enjoyed a late rally to cut the deficit to 27-21 at the halfway point. They began to find their fluency in the attacking end and mixed things up with an effective zonal mark, while Amy Clinton maintained her clinical record under the posts.

Dragons’ zonal mark helped them reduce the arrears to 37-31 early in the fourth quarter, although Sirens took the game away from their opponents with a run of seven straight goals in a blistering four-minute spell.

As the match came to its conclusion, Karen Atkinson’s side showed the belief in their own work. They were clinical in the attacking end and thwarted the Dragons’ attacking passages of play in the latter stages, to add an emphatic nature to the scoreline.

Sky Sports is your home of netball. The Vitality Netball Superleague continues at 6pm with two back-to-back matches streamed on the Sky Sports YouTube channel.