Sara Francis-Bayman’s side will now face Leeds Rhinos Netball in the semi-finals at the Copper Box Arena on Saturday; Team Bath Netball will meet Manchester Thunder in the other semi-final Loughborough Lightning secured top spot in the Vitality Netball Superleague after a 54-35 victory over Team Bath Netball in the final game of the regular season.

Sara Francis-Bayman’s team went into the contest knowing they needed to win by at least four goals in order to finish on top. However, they were off the back of a loss to Manchester Thunder last weekend and had been beaten by Bath earlier in the season.

Lightning led from the start, though, as they shook the usually unflappable Bath attack-end early, and they kept their foot to the floor for the full 48 minutes.

The result means Lightning will take on Leeds Rhinos Netball in one of the Superleague semi-finals on Saturday afternoon at the Copper Box Arena. Team Bath Netball will face the 2019 champions, Manchester Thunder, in the other.

The winners of the two play-off matches will then duel for the title on Sunday afternoon, and every match will be shown live on Sky Sports and streamed on the Sky Sports YouTube channel.

“Tonight, the players did such a good job at just gradually building a lead and continuously pushing on.

“I’m really proud of their bounce back from last week, because they were terrible and to come out and play like they did this evening, it takes a lot of guts.” 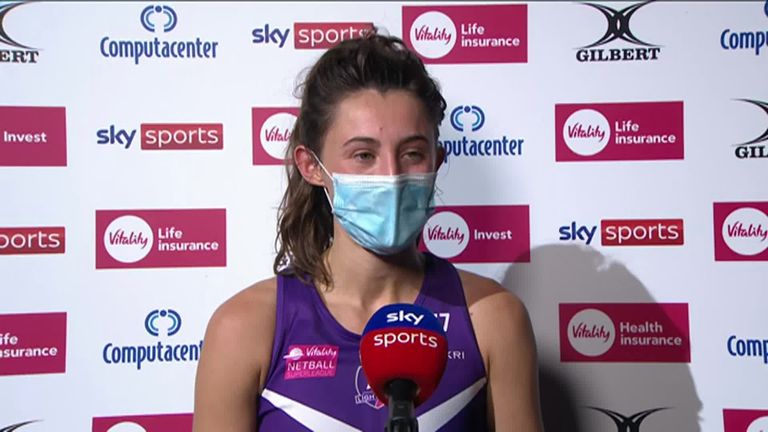 Loughborough Lightning will take a considerable amount of momentum into the semi-finals, hear the thoughts of Beth Cobden after their victory

Loughborough Lightning’s 19-goal victory over Bath started with an early three-goal run and, from that point, they never looked back.

Ella Clark and Mary Cholhok connected instantly in the circle and, in contrast, Bath looked hesitant and nervous going forwards.

As the quarter continued, Layla Guscoth showed her class to secure key turnovers and that kept it tight after 12 minutes. However, an unchanged Lightning outfit then moved into fifth gear from the start of the second quarter onwards.

Moving forwards, they continued to find Cholhok and Clark incredibly easily and, in defence, they secured ball from every part of the court at the Copper Box Arena.

Sam May pushed Kim Borger off her game, while Beth Cobden’s long arms and relentless hustle, played havoc in the goal third and that limited Bath’s options.

Lightning’s 26-18 half-time lead was richly deserved, and the break did little to disrupt their flow. In the second half, Bath made changes to see if they could find some answers, but none were forthcoming.

The result allows Lightning to take considerable momentum into their semi-final against Leeds Rhinos Netball, while Bath will need to find something special ahead of their duel with the 2019 champions, Manchester Thunder. In the earlier contest, Surrey Storm finished their season by winning back the Tom Reseigh Trophy as a result of their 39-35 victory over Wasps.

The duel, played in memory of the late Surrey Storm team manager Tom Reseigh, saw Storm illustrate what they were capable of at both ends of the court.

Karyn Bailey, who was playing in her last game before retirement, was an anchor in their shooting circle, while the player of the match Felisitus Kwangwa picked off a wealth of ball.

For Wasps, the four-goal loss means a challenging season has ended with the two-time champions finishing in seventh position, the lowest placing they have recorded in their history.

Sky Sports is your home of netball. The Vitality Netball Superleague continues on Saturday, with the semi-finals live on Sky Sports Action and Mix and streamed on the Sky Sports YouTube channel from 1.30pm.