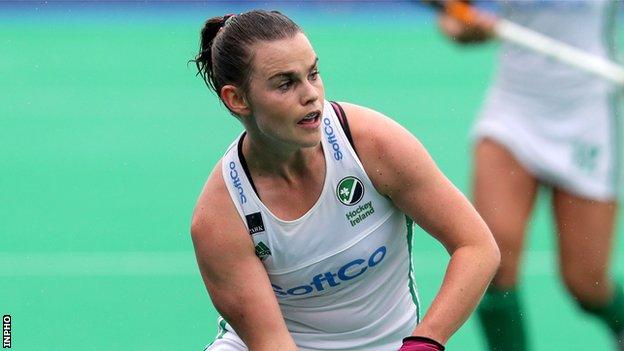 Ireland's Lizzie Colvin says the squad are focusing on the factors they can control amid continuing speculation on whether the Olympics will go ahead.

The Tokyo 2020 Games were rescheduled for 2021 because of the Covid pandemic.

"We are focusing on the stuff we can control, training hard, working hard on the pitch and our results," said Colvin after Sunday's 4-4 draw with Spain.

"We can't control what happens over the next few months and that decision around Japan," she added.

"From a personal point of view I'm just taking every day as it comes and enjoying the time I have to play hockey and play alongside my friends."

Ireland recovered from a 4-2 half-time deficit against Spain to earn a draw in the fifth and final match of their series.

Ireland finished their series with two wins, two draws and a defeat.

"We had a lot of young players in the squad, not so much experience, so there was a lot of trial involved and a lot of players playing out of position," explained Colvin.

"We've played some nice passing hockey and scored some really good goals so it's been really promising and really positive.

"Sometimes after Christmas it takes a while to get back up to speed but I think we have all been pleasantly surprised. The hard work we put in before Christmas has paid off and we've really hit the ground running."

The series in Murcia has been played with strict guidelines in place to help prevent the spread of the coronavirus.

"We have had Covid-19 protocols in place and we all want to act responsibly. That has been at the forefront of everything we have done," said Colvin.

"Team morale is a huge thing for us and we have taken time to get to know each other, catch up with each other, enjoy each other's company and relax away from the pitch.

"We were all giddy at the airport before we left – you'd think we had never been on a trip before – it's been great to get away together and play some international games."