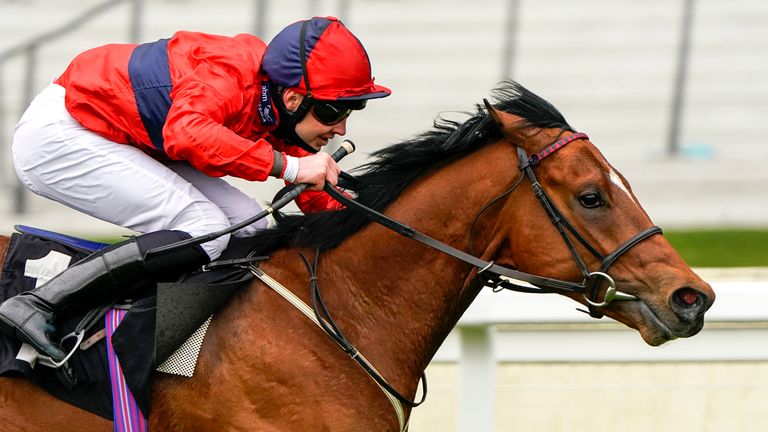 Impressive Windsor Castle winner Chipotle is among 23 remaining juveniles in the Weatherbys Super Sprint at Newbury on Saturday.

Eve Johnson Houghton’s two-year-old won the Brocklesby, the first juvenile turf race of the season at Doncaster, and took his record to three wins from four outings at Royal Ascot.

Johnson Houghton said: “Chipotle will definitely run unless it’s bottomless ground, but it looks as if we might be heading for a bit of a heatwave and that will be ideal for him. He travelled fine at Sandown, but the last furlong was heavy, and he was on the worst of it. He just couldn’t pick his feet up out of it.

“He was very impressive on fast ground at Royal Ascot, and the time was very good too. He’s been great since, but I can’t take any credit as he tra ins himself and just sleeps, eats and works.

“Unfortunately, Charlie (Bishop) is banned, but we’ve got a worthy replacement in David Probert.”

Unusually there will not be a maximum field this year for the £200,000 contest, but another who ran well at Ascot and who could turn up is Richard Fahey’s Vintage Clarets – third to Berkshire Shadow in the Coventry. “He’s a very fast horse and I think if he’d run in the Norfolk rather than Perfect Power he would have won it.

“The thing with the Super Sprint is that it can be a messy race, you can get drawn on the wrong side.

“However, I own half of him and I’m looking at the prize money!

“It’s something we target, it’s a racing man’s race, a race I look forward to every year.”

However, Fahey will not be running Khunan, who performed well in defeat behind stablemate Perfect Power in the Norfolk, with either the Molecomb or Richmond Stakes at Goodwood on his agenda.

Richard Hannon’s Gubbass, not seen since a promising winning debut at Leicester, could run for a stable with a formidable record in the race, as could Banner Moonshine, Desert, Raging, Symphony Perfect and Zoltan Star.

One of the attractions of the Super Sprint is that it is not always won by one of the bigger outfits. Rod Millman, who won with Lord Kintyre in 1997 and Bettys Hope two years ago, has a likely enough sort again in Amazonian Dream, while Jonny Portman, successful in 2016 with Mrs Danvers, has a live outsider in Sienna Bonnie.

Millman, who has also had a second and two thirds in the race, said: “Amazonian Dream was only just beaten by Berkshire Shadow at Newbury first time out and we feel he’s improved at home since, but he hasn’t shown it on the track for whatever reason.

“He’s got a bit to find with Chipotle on Royal Ascot form, but he boiled over there, which surprised us as he’s usually very quiet. He’ll probably wear a lip chain in the preliminaries to see if that helps, and at the moment I’ve got Oisin Murphy to ride.

“It’s a race we always try to find one for, and we are always very well looked after.”

Portman said: “Sienna Bonnie hasn’t had quite the same run into the race as Mrs Danvers, who was unbeaten, but it’s a good race for her and it’s been her target all year. She is at the foot of the weights and drying ground will be ideal for her.

“She’s a ‘jump and run’ horse who likes fast ground, and the last three times it’s not been ideal for her. She’s still run very respectably in good company.”