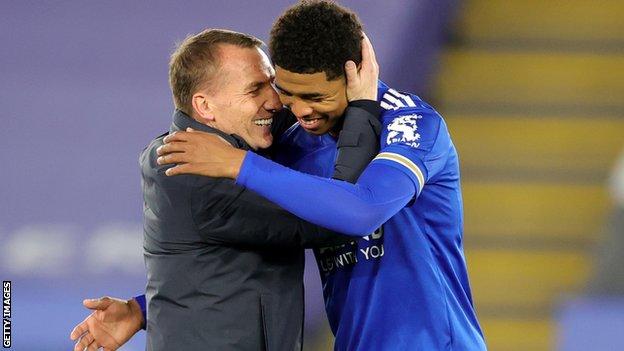 Leicester City defender Wesley Fofana has thanked the Premier League, Crystal Palace and keeper Vicente Guaita for allowing him to break his Ramadan fast during the game against the Eagles.

During Ramadan many Muslims abstain from food and drink in daylight hours.

Eagles keeper Guaita waited to take a goal-kick just after the half-hour mark in the evening game against the Foxes.

The pause in play allowed Fofana to take in some liquids on the touchline before returning to play.

The short delay for when there was a natural break in play was agreed in the captain's meeting prior to the game and Fofana said "that's what makes football wonderful" in a social media post.

Fofana played the whole game as Leicester beat Palace 2-1 but he came off after 61 minutes in the previous game against West Brom, which the Foxes won 3-0.

Prior to that, he had played all of the game when Leicester beat Southampton 1-0 in their FA Cup semi-final.

"He's a young player in the middle of Ramadan so he's obviously not eating during the day," said Leicester boss Brendan Rodgers on Friday.

"I think it's absolutely remarkable. If you think of his performance at the weekend in an FA Cup semi-final, when he hasn't eaten all day, and then he had his first taste of food (later on).

"It was the same against West Brom, with the 8pm kick-off, he's not eaten or drank and he can still perform to that level.

"It [West Brom] was just one where I thought I could get him off and he could get some food into him on the bench and just protect him a little bit.

"I work with lots of players who have similar devotion to their faith and I think, for a lot of the guys, it gives them strength."