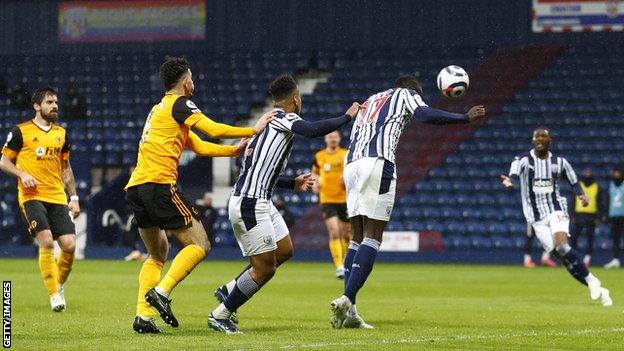 West Brom boss Sam Allardyce says the Baggies need a "magic miracle and fairy dust" to stay in the Premier League after drawing the Black Country derby with Wolves.

Allardyce's proud record of never being relegated now requires his side to win all four of their remaining games, beginning with a trip to Arsenal on Sunday, and hope for a complete collapse from one of the five teams outside the drop zone that they can still catch.

That combination seems highly unlikely, even with the battling qualities West Brom showed during a game played in torrential rain to earn a point through Mbaye Diagne's header after Fabio Silva's fortunate first-half opener had put Wolves in front.

Nuno Espirito Santo's depleted squad, who lost Wily Boly in the build-up to a positive coronavirus test, carried the greater threat for most of the contest, with Baggies keeper Sam Johnstone saving well from Nelson Semedo and Adama Traore either side of the interval.

However, while Silva ran away in jubilant celebration after sending the ball over Johnstone and into the net in stoppage time, replays showed the young Portuguese knew nothing about it as Kyle Bartley's clearance cannoned off his standing foot.

Allardyce will talk to the board about whether to stay next season.

"We owe it to everyone to keep a professional attitude and go out and try to win every game we've got left and hope every team above us loses every game and then, by some magic miracle and some fairy dust, we stay up," he said.

"I can't believe we haven't won or taken the chances we created. I'm very sad for the players they haven't converted this game into a victory.

"You look at Wolves' goal and say 'why can't we get a bit of luck like that?'"

The first half was a microcosm of West Brom's season as a whole.

They were very poor for the first half-hour, then they made a change, took some time to adjust, should have scored but didn't and almost immediately conceded a self-inflicted opener.

On an awful night weather-wise, it was hard not to feel sorry for Dara O'Shea, who in addition to the ignominy of being substituted in the first half, was as far as it was possible to be from the dug-out when the board went up, condemning him to a sad, lonely, wet walk around half of the pitch.

The chance was excellent as Semi Ajeyi rose at the far post to meet Conor Gallagher's cross. Ajeyi's header was clean but it lacked accuracy, which allowed Roman Saiss to clear.

It was the kind of chance that had to be taken but invariably they have failed to do so over the past few, frustrating weeks, and they were made to pay almost immediately.

From that point, West Brom were always in trouble. For while Wolves are not the most exciting team in the Premier League, they are the only top-flight side not to lose a game after scoring the opening goal, which now extends to 10 matches.

Marshalled superbly by skipper Conor Coady, Wolves' defence kept their shape as the conditions worsened and by the end, the visitors looked more likely to get a winner than their hosts, who so desperately needed one.

Big decisions ahead for the Baggies

Allardyce has kept repeating he is unwilling to discuss his future until West Brom's fate is known.

That day is now getting very close, meaning the Baggies hierarchy will have to tell Allardyce the funds he will be given for a promotion campaign.

The clear problem is most of the men who have beyond question improved the Baggies over the final third of the campaign are on loan.

Diagne is one of them, Okay Yokuslu another and Ainsley Maitland-Niles will not enhance his England aspirations in the Championship.

The evidence of Norwich and Watford underlines the advantage parachute payments give relegated clubs but there is a lot of soul-searching to be done at The Hawthorns given owner Guochuan Lai is known to be looking for a buyer.

Wolves' woes at The Hawthorns – the stats

Wolves remain winless in their last 10 away league games against West Brom (D5, L5) since a 4-2 win in September 1996. Wolves remain the only team not to lose when scoring the first goal in a Premier League game this season (W8, D2). Wolves' Fabio Silva (four goals) has overtaken Ricardo Vaz Te (three) to become the second highest scoring Portuguese teenager in Premier League history, with only Cristiano Ronaldo (eight) netting more in the competition before turning 20. Conor Townsend's assist for Mbaye Diagne's equaliser was his first in 46 league games for West Brom, since setting up a goal against Barnsley in October 2019 in the Championship.Wolves captain Conor Coady and goalkeeper Rui Patricio both played their 109th Premier League games for Wolves this evening making them the outright record appearance makers for the club in the competition (overtaking Matt Jarvis, 108).