After seeing a four-hole lead whittled down to one, Tommy Fleetwood scrambles a par at the last to beat Bryson DeChambeau and scrape into the knockout stages of the WGC Match Play in Texas. 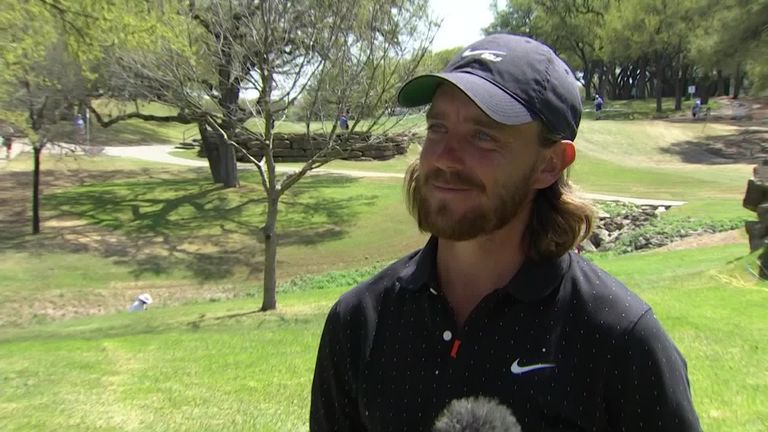 Tommy Fleetwood withstood a strong fightback from Bryson DeChambeau and scrambled par from a tough position at the last to book his place in the last 16 of the WGC-Dell Technologies Match Play.

Fleetwood was four up after just seven holes with DeChambeau struggling with his distance control, but the Englishman’s lead was whittled down to just one when he missed from five feet for par at the 15th, and Fleetwood did well to halve the 16th with a 15-foot putt for birdie.

But a halved match looked likely at the last when DeChambeau’s drive came up just short of the green, with Fleetwood in trouble after pulling his tee shot way left and into a ditch in dry water hazard, although he was able to hack out without needing to take a penalty drop, defying an awkward stance to stab over the green before the American chipped to eight feet.

After Fleetwood replied with a delicate flop-shot to four feet, DeChambeau missed his putt to square the match and watched helplessly as his opponent rolled in his par putt to win the match and the group, securing a clash against Dylan Frittelli in the first round of the knockout matches. “At the end of the day the result is what matters, advancing is what matters and I’ll take all the positives from that,” said Fleetwood, who birdied the last to halve with Si Woo Kim on day one before easing to victory over Antoine Rozner on Thursday.

“I got up early and I was playing really solid and then it turned really scrappy on the back nine, and Bryson played more solid on the back nine. I made a great putt on 16 really after missing one on 15, and 18 was b it of a rollercoaster.”

Fleetwood conceded there was an element of good fortune over his second shot from inside the hazard line, adding: “I knew I could hit the ball so I could find a way into that, and then I was just working out sort of angles or which way I can get it to go or anything. It came out way better than I thought it would. “It helps when you can ground your club in a hazard now, just having an idea of sort of what the ground is like. But still, I had no idea it would be like that. And then I had a chance of a flop shot. I had a decent lie. Actually that was a very impressive shot, give myself a chance for a putt,

“Bryson missed, and knock it in and yeah, bit of a strange way to get a par on 18, but enough is enough. But just to give myself a chance and have the chance and hit a great putt like that, it’s nice to have done it, I’d have just rather it been over earlier.”

Ian Poulter ensured his place in the knockout stages with his third win of the week, a 2&1 win over Lanto Griffin, while Rory McIlroy holed a 31-foot birdie putt at the last to snatch a half against Cameron Smith, with both finishing behind Poulter in Group 11.

“My win was obviously extremely boring according to what I’ve just heard,” said Poulter, who plays Scottie Scheffler on Saturday. “Sergio making a hole-in-one against Westy to advance and MacIntyre just drives it to three feet on 18 to go through. I just managed a 2&1 win and I’m through, so I guess it was quite lame.

Jon Rahm’s final match in Group 3 ended all-square against Ryan Palmer, but Rahm then birdied the second extra hole against the American to book a clash with South African Erik van Rooyen.

Incredibly, Rahm was the only top seed from the 16 groups to advance to the weekend.