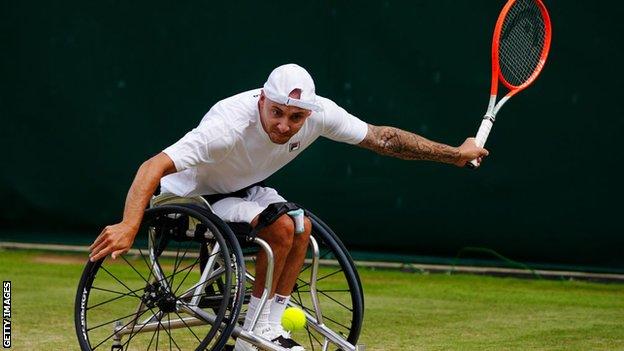 Lapthorne claimed his 13th Grand Slam title overall and an 11th in doubles as he and Wagner triumphed 6-1 3-6 6-4.

Lapthorne and Wagner dominated the opening set of their doubles final but had to dig deep to win the decider after Australia's world number one Alcott and the Netherlands' Schroder levelled matters.

Alcott and Schroder broke serve early in the third set to lead 3-1 but Lapthorne and Wagner rallied with successive breaks to move 5-3 ahead before ultimately serving out to claim the title.

"That was one of the best matches this division has ever seen. We played well to win the first set but it was tough from there," said Lapthorne.

Reid's semi-final followed a similar pattern as he broke early to take the first set and lost the second heavily before regrouping to set up a final against Belgium's Joachim Gerard, who outlasted France's Stephane Houdet in a marathon tie-break to win 7-5 7-6 (18-16).

Jordanne Whiley, however, was unable to reach a maiden Wimbledon final in the women's wheelchair singles as she lost her semi-final 6-4 6-1 to Dutch top seed Diede de Groot.

Whiley, the 2015 US Open winner, had beaten defending champion Aniek van Koot in the previous round but, after a close first set, was outgunned by 10-time Grand Slam winner De Groot.

The 29-year-old could still claim a fifth Wimbledon women's wheelchair doubles title, however, after she and Japan's Yui Kamiji brushed aside Momoko Ohtani and Angelica Bernal 6-1 6-2.