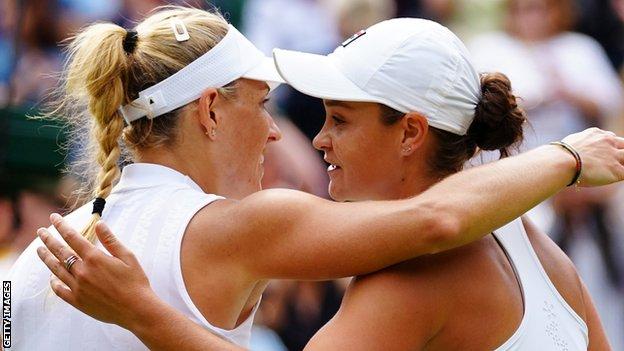 After two wins each in their previous four meetings, Barty won the first Grand Slam meeting between the pair

The pair, both playing their first SW19 semi-finals, meet later on Thursday.

Whoever it will be, they will face a world number one who has not dropped a set since the opening round.

Barty raised her racquet to her head after sealing victory in a high-quality contest, sharing a warm hug with 2018 champion Kerber at the net before taking the acclaim of the Centre Court crowd.

"This is incredible. This is as close to a good tennis match I will play. Angie brought the best out of me and I knew I had to be at my best," said Barty.

"Now I get the chance on Saturday to live out a total dream."

Barty so close to emulating her idol Goolagong

Barty has long spoken of her dream of winning Wimbledon and is now one more victory away from achieving it – on the 50th anniversary of her idol Evonne Goolagong's first SW19 triumph.

The run has come after Barty allayed fears she might not even be fit to play at the All England Club. She was managing a hip injury at the French Open which led to her retiring from her second-round match at Roland Garros.

Coming into the tournament, she said she was fit and ready – and so it has proved.

She is the first Australian to reach the women's final since Goolagong lifted her second title at the All England Club in 1980.

While Barty won her maiden Grand Slam on the Roland Garros clay, she has long insisted the grass courts are her favourite surface. This fortnight, she has shown why.

Barty needed all of her quality and fight to stop Kerber – who was on a 10-match winning streak on the grass – taking this match into a decider.

After the German led 5-2 in the second set, Barty kept her nerve and continued to land winners to break back, before dominating the tie-break.

"I have had ups, downs and everything in between on this journey," said Barty, whose scallop-hemmed dress at these championships is a tribute to the one Goolagong wore when she won the title in 1971.

"There's a lot of things which have led to this point. To play in the final at Wimbledon on Saturday will be the best thing ever."

View more on twitterLive scores, results and order of playAlerts: Get tennis news sent to your phone