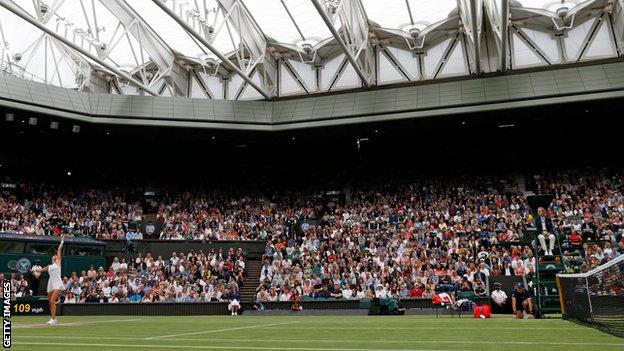 On Tuesday, Centre Court welcomed back a 100% crowd for the first time since the 2019 men's final

The cheer which greeted Karolina Pliskova and Viktorija Golubic onto Court One on Tuesday lunchtime might not have been the loudest of the Wimbledon fortnight, but it had the deepest significance.

As the pair strode out, they looked up to see fans sat around all parts of the stadium. No masks, no two metres of separation, no fear.

This day marked another step back towards sporting 'normality' in the UK. Capacity crowds were allowed to watch matches on Centre Court and Court One at the All England Club.

It was the first major UK sporting event to be allowed 100%-full stadiums since the coronavirus pandemic began.

"Everyone has waited a long time for this. The fact it is fully open at Wimbledon – such an iconic event – made us feel very excited," said Raj Gill, a 25-year-old trainee pilot who had tickets for Centre Court with his girlfriend Prem Nandrha.

Hearing the 15,000-seater court would have a full house again made bagging tickets "even better", added 23-year-old devops engineer Prem.

"You want the atmosphere. And bringing the extra capacity back means it has an extra 'oomph'," she said.

On returning to a more crowded area, she added: "Initially I had some nerves going back out in public again, not necessarily because of Covid but feeling comfortable in crowded places again.

"I just felt so not used to it. But today it didn't really matter, I was excited to get tickets here and enjoy a sense of normality." 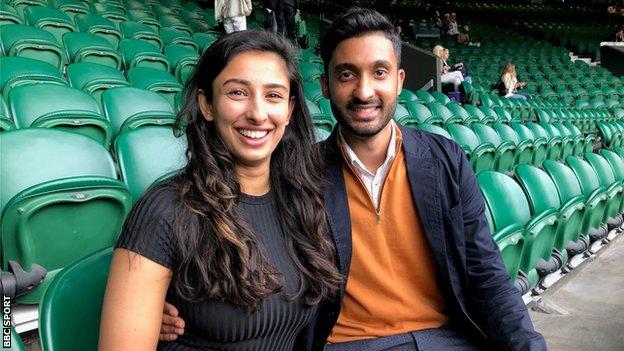 Prem Nandrha and Raj Gill, who are a couple from east London and both vaccinated, bought their Centre Court tickets on Sunday

On Monday, Prime Minister Boris Johnson announced the plan for all Covid-19 lockdown restrictions to end on 19 July.

Less than 24 hours later at Wimbledon, there was a celebratory feeling. That this was a taste of things come for the nation's sporting fans.

"It has been great to see people all dressed up and getting into the Wimbledon spirit," said Rosemary Day, a 59-year-old from Peterborough who was on Court One with her sister-in-law Barbara Whittaker.

"I'm pleasantly surprised. I was a little apprehensive before coming here. All of my anxieties have been groundless so far."

As has been the case throughout the fortnight, ticketholders for Tuesday's play were required to show proof of their Covid status – vaccination, negative lateral flow test or antibody certificate – on arrival.

"I was worried about the entry requirements – would we have the right paperwork?" added Rosemary, who is double vaccinated. "But it has been really smooth."

Fans arriving were also asked to "observe the guidance" from the All England Club on wearing face coverings.

The requirement was for people to wear masks while walking around the grounds. When sitting in their seats, it was not mandatory. 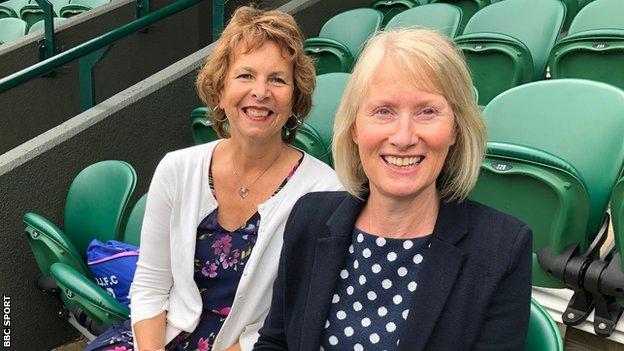 Sisters-in-law Barbara Whittaker, 58, and Rosemary Day, 59, were making their first visit to Court One

From observing the thousands of people wandering around outside before play started on the show courts, the vast majority were not wearing them.

Security staff were heard telling fans going into Court One they were "not Covid marshals", reinforcing that the decision whether or not to wear one in their seat was up to personal discretion.

On Centre Court, it was difficult to spot many people with a face covering.

"I love sport and to be back seeing live sport is incredible. The atmosphere was fantastic," said ticket-holder Patrick Heneghan from Winchester.

Another fan, Claudia Iton from Guildford, said she had initially been apprehensive about the full crowd, adding it "felt strange with people milling about without a mask".

But afterwards she was glad to be back. "We found some things missing in the experience this year but I love Wimbledon and it always has its special charm."

The experience seemed to have provided a much-needed buzz to those watching, with Raj and Prem now desperate to go to more sporting events.

"Finding tickets is the difficult thing. Everyone has got the same ambition," said Raj.

"Because of the year we've all had, being enclosed, we all just want to have those experiences again."