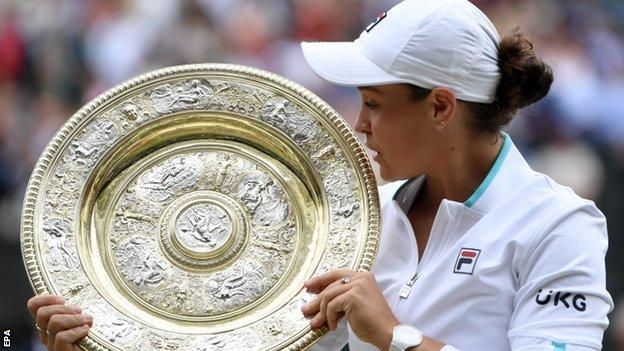 Champion Ashleigh Barty says it was a "miracle" she was at Wimbledon and that her team had kept from her the chances of her recovering from injury in time.

That was 37 days ago – this injury was meant to sideline her for two months.

"[My team] kept a lot of cards close to their chest and didn't tell me a lot of the odds," the 25-year-old said.

"I think them not telling me that just proved how much we were against the odds. I think now to be playing pain-free through this event was incredible.

"It's funny, sometimes the stars align, you can think positively, you can plan, and … you can chase after your dreams.

"Being able to be able to play here at Wimbledon was nothing short of a miracle."

With her victory, Barty became the first Australian to win the women's singles title here since Evonne Goolagong Cawley 41 years ago.

It also coincided with the 50th anniversary of the seven-time Grand Slam champion's first Wimbledon title and Barty had been wearing an outfit inspired by the one her idol wore back then.

"Evonne is a very special person in my life. I think she has been iconic in paving a way for young indigenous youth to believe in their dreams and to chase their dreams," said Barty, who is now a two-time major singles champion after her 2019 French Open victory.

"She's done exactly that for me as well. I think being able to share that with her and share some pretty special victories now with her, to be able to create my own path is really incredible, really exciting.

"She's just been an icon for years and years, not just on the tennis court. Her legacy off the court is incredible. I think if I could be half the person that Evonne is, I'd be a very, very happy person."

Barty's victory comes 10 years after she won the Wimbledon junior title – and via an 18-month break from tennis where she played professional cricket – and the Venus Rosewater Dish is the trophy she has most coveted.

"For tennis players all over the globe, I feel like Wimbledon is where tennis was born essentially. This is where it all started. This is where so many hopes and dreams were kind of born," she said.

Barty is due to represent Australia at the Tokyo Olympics later this month and is confident that she is in good shape for that.

"I certainly have no fears about my fitness. Of course, some things will happen. That's normal. That's natural," she said.

"That's life of being an athlete. But I know that I've got the very best team around me to prepare me in a way as best as we can."