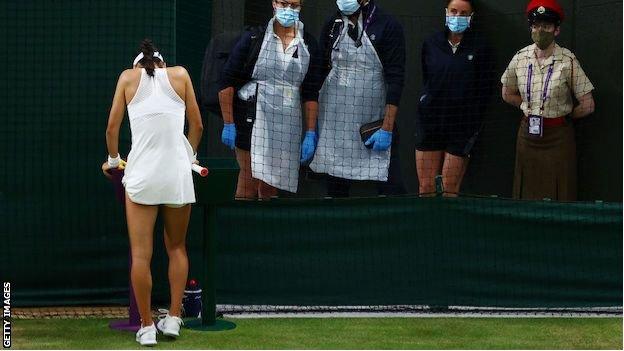 Emma Raducanu will "come back better prepared and stronger" after being forced to retire in the Wimbledon fourth round, her Billie Jean King Cup captain Anne Keothavong says.

She had only made her WTA Tour debut in June, but beat two top-50 players on her way to the last 16.

No details have been released about what caused the breathing difficulties or the nature of them.

Former British number one Keothavong added: "Last night I saw her leave the club. It was a difficult situation for her to be in, and for everyone to witness, but she'll be just fine.

"In terms of her preparation, her and her team did everything exactly the same. They prepared exactly the same as they did for her other matches, she purposely stayed over at Aorangi [practice courts], rather than practising on the main courts before her match just to stay out of the public.

"It was just unfortunate. Had she played earlier in the day, a similar thing may have unfolded as well.

"It was always going to be a difficult match given the hype and the buzz around it, but she'll learn from this, it's been a fantastic Wimbledon debut for her, and next year she'll come better prepared and stronger for it."

Raducanu was trailing 4-6 0-3 to Ajla Tomljanovic when she became unwell, leaving the court before it was announced she would not be returning.

Their match had not started until 20:00 BST, scheduled last on Court One after a five-set thriller between Alexander Zverev and Felix Auger-Aliassime.

In a statement, Wimbledon said: "The scheduling of the order of play each day at the Championships is a complex operation, and although we take great care when scheduling matches and allocating courts on a daily basis, it is not an exact science.

"All decisions are made with fairness and the best interests of the tournament, players, spectators and our worldwide broadcast audience at heart, but the unpredictable nature of the length of matches and the British weather can and will cause disruption to any schedule."

Keothavong, who brought Raducanu into the Billie Jean King Cup – formerly Fed Cup – squad earlier in the year, said the teenager would be keen to return to the court as soon as possible.

"Everyone is going to want a piece of her, but she's got good people around her who will do whatever they can to make sure her feet stay on the ground," she said.

"She's a sensible young girl, and she still hasn't played a full year on the tour yet, so for her she'll want to get right back at it. But it's a lot to take in, and we do have to remind ourselves that she's still very young and it is still all very new."

Live scores, results and order of playAlerts: Get tennis news sent to your phoneBeckham's biggest challenge: A race to play football in all seven continents The rise and fall of a super-influencer: A shocking true story of a con artist and her global following
Source