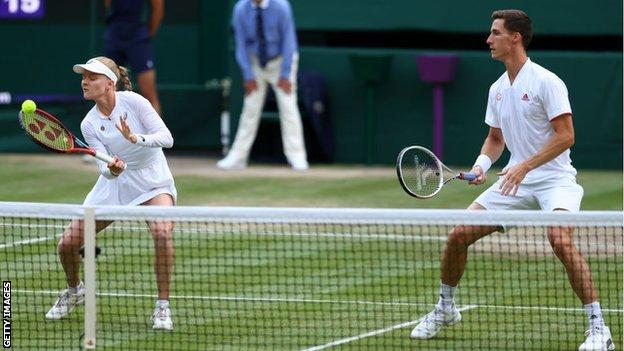 British pair Harriet Dart and Joe Salisbury have reached the final of the mixed doubles at Wimbledon.

They gained a 6-2 4-6 6-4 victory over 46-year-old Czech Kveta Peschke and Germany's Kevin Krawietz.

The match was held on Centre Court with the opening two sets played with the roof open, before it was closed at the end of the second set.

They will face the team of China's Shuai Zhang and Australia's John Peers on Court One with the winners meeting Dart and Salisbury in Sunday's final.

Salisbury has won two doubles events at Grand Slams, winning the men's doubles at the 2020 Australian Open with Rajeev Ram, before teaming up with Krawczyk to lift the French Open mixed doubles title earlier this year.

Dart, who lost a Wimbledon mixed doubles semi-final with Jay Clarke in 2018, will be playing in her first slam final.

Dart and Salisbury gained the crucial break of serve in the 10th game of the third set to eliminate the ninth seeds.