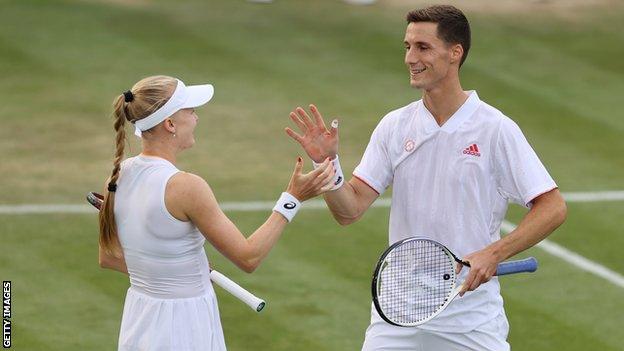 Britons Harriet Dart and Joe Salisbury beat Wesley Koolhof and Demi Schuurs 6-2 1-6 6-4 to reach the third round of the mixed doubles at Wimbledon.

The match had been all square at one set apiece when rain ended it on Monday and Dart and Salisbury knocked out the third seeds in the decider on Tuesday.

Dart and Salisbury broke the Dutch pair in the third game and were able to hold serve for the remainder of the match.

Fellow Britons Arthur Fery and Tara Moore also booked their place in the third round on what was largely a weather-hit day on the outside courts.

The pair had been 6-3 5-3 up against France's Fabrice Martin and Alexa Guarachi of Chile on Monday before play was suspended because of rain.

Fery and Moore won the one game they needed for victory and will play compatriot Neal Skupski and American partner Desirae Krawczyk next.

Top seeds through, Gauff and McNally out

In the men's doubles, top seeds Nikola Mektic and Mate Pavic fought back from two sets down to reach the semi-finals.

They will play Briton's Salisbury and and American Rajeev Ram or Colombian pair Juan Sebastian Cabal and Robert Farah in the last four.

American duo Coco Gauff and Caty McNally have exited the women's doubles in the third round after a 7-6 (7-0) 4-6 6-3 defeat by Russians Veronika Kudermetova and Elena Vesnina.

Live scores, results and order of playAlerts: Get tennis news sent to your phoneBeckham's biggest challenge: A race to play football in all seven continents The rise and fall of a super-influencer: A shocking true story of a con artist and her global following#
Source