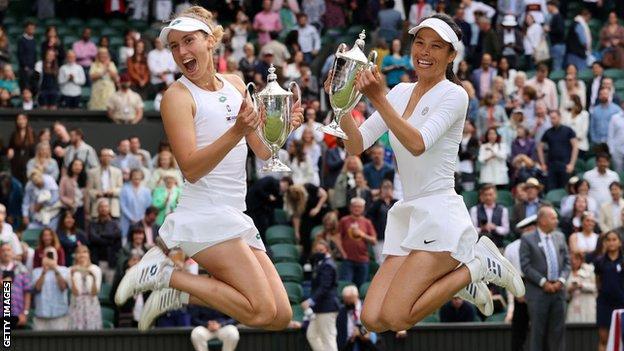 Hsieh, of Chinese Taipei, and Belgian Mertens survived two Championship points in the second set as they came back to triumph 3-6 7-5 9-7.

It is a third Wimbledon doubles title and fourth Grand Slam win for Hsieh.

Mertens claimed her second Grand Slam title of the year following her doubles success at the Australian Open.

Kudermetova, 24, and Vesnina, 34, failed to take two opportunities to seal victory when serving for the title at 5-4 in the second set and their opponents took full advantage as they claimed successive breaks to level the match.

Hsieh, 35, and Mertens, 25, appeared to have completed an impressive turnaround after breaking serve in the eighth game of the deciding set for a 5-3 lead – but they too were unable to serve out the contest.

They prevailed 9-7 in a tense finale, however, which also saw the Russians serve for the title at 7-6 in the third.

Victory ensures Mertens will return to number one in the women's doubles rankings on Monday.