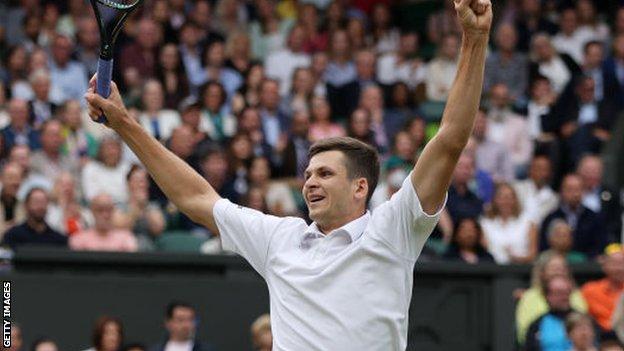 He trailed by two sets to one overnight but emerged the fresher of the two.

The 24-year-old will face Swiss sixth seed Federer on Wednesday.

It is a first Grand Slam quarter-final appearance for Hurkacz, whose previous best showing came at Wimbledon when he reached the third round in 2019.

On facing childhood inspiration Federer in the last eight at the All England Club, Hurkacz said: "For this sport, Roger is unbelievable, what he does, how he plays and the titles he has won throughout his career. He has inspired so many people.

"It's going to be fun, but I'm hoping to get a little bit of support."

In the first meeting between the players, which began on court two on Monday, Medvedev was in charge when play restarted on Tuesday.

The Russian 25-year-old had never been beyond the third round at Wimbledon before this year and had to come back from two sets down to beat Marin Cilic in the previous round.

This time there was no final-set joy for the Australian Open finalist, as Hurkacz maintained his momentum with two breaks in the fifth – the second sealing a dream quarter-final meeting with Federer.

"Daniil is an unbelievable player. He is number two in the world, has unbelievable skills but being able to win this match in front of you guys feels great," Hurkacz said in his post-match interview.

"Stopping yesterday at the end of the fourth set was a first time for me, I had talks with my coach and worked with my physio to prepare for today and do the things better than yesterday."