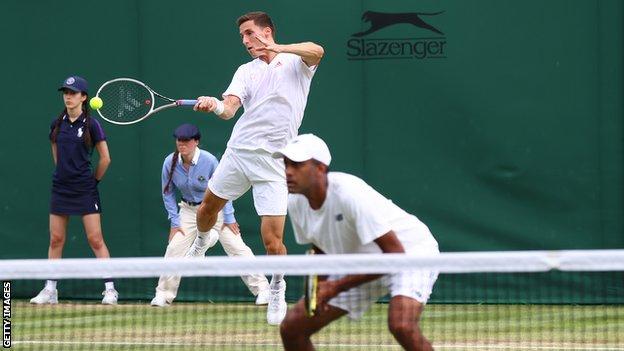 Salisbury wrapped up the victory in style with a deft backhand return.

Ram and Salisbury, seeded sixth, will face top seeds Nikola Mektic and Mate Pavic of Croatia in the last four.

It was a memorable day for Salisbury who later booked his place in the quarter-finals of the mixed doubles.

Fittingly, Dart wrapped up the victory with a service game to love.

They will now face fellow Briton Naomi Broady and her French partner Jeremy Chardy in the last eight.

Broady and Chardy had earlier eased through after a 6-3 7-5 win over South African Raven Klaasen and Croatia's Darija Jurak.

Briton Neal Skupski and American Desirae Krawczyk secured their place after a 7-6 (7-5) 6-3 win over British pair Arthur Fery and Tara Moore in 89 minutes.

Fery and Moore forced a tie-break in the first set but the experience of Skupski and Krawczyk told before they closed out the second set in more routine fashion.