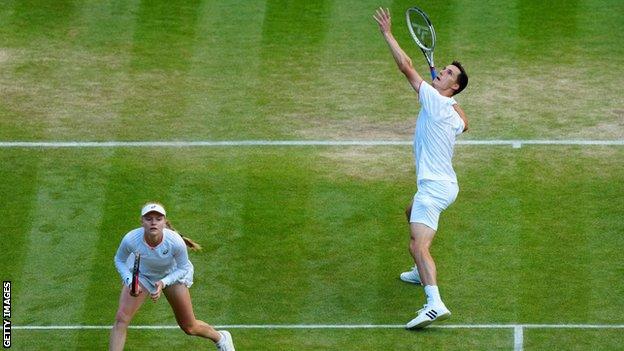 Britons Joe Salisbury and Harriet Dart are through to the semi-finals of the mixed doubles at Wimbledon.

They now face Kevin Krawietz of Germany and Czech Kveta Peschke on Friday.

Salisbury's victory came after the earlier disappointment of defeat in the semi-final of the men's doubles alongside American partner Rajeev Ram.

Djokovic ready for Shapovalov battleBarty to face Pliskova in final

Salisbury was bidding to become the first Briton to reach the men's doubles final since Jamie Murray in 2015.

Briton Neal Skupski and American Desirae Krawczyk are also through to the semi-finals of the mixed doubles.

Skupski and Krawczyk beat Dutchman Jean-Julien Rojer and Slovenian Andreja Klepac 7-6 (8-6) 6-2 and have yet to drop a set in the tournament.

Krawczyk is bidding for a second consecutive Grand Slam title with a British player having won the French Open alongside Salisbury.

The seventh seeds will play Australian John Peers and Shuai Zhang of China in the last four on Friday.

Murray was the last British man to win the mixed doubles, alongside Martina Hingis in 2017, while Heather Watson was the last woman when she won it the year before with Finn Henri Kontinen.

The last time an all-British duo won the mixed doubles at Wimbledon was in 1987 with Jo Durie and Jeremy Bates.