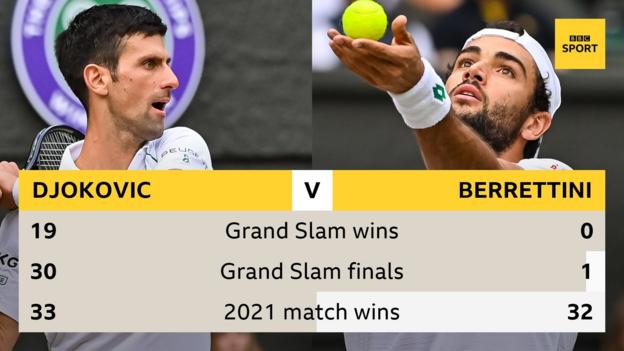 Djokovic has won both of his previous matches against Berrettini, at the 2019 ATP Finals and last month's French Open

Novak Djokovic says it "would mean everything" to win a sixth Wimbledon title which would equal Roger Federer and Rafael Nadal's all-time record of 20 Grand Slam men's triumphs.

"So it's going to be a very tough match I think for both of us. But I'm looking forward to a great battle."

Djokovic is going for a third Grand Slam of the year, having already won the Australian Open and French Open titles.

On the clay at Roland Garros, Djokovic beat Berrettini in the quarter-finals with a four-set win after a dominant start.

On whether he will receive the support of the Centre Court crowd, Djokovic said: "Berrettini is kind of an underdog.

"People also like to see someone win who is an underdog or is not maybe expected to win, is not the favourite to win.

"But hopefully people can also recognise also the importance of this match for me, the history that is on the line." 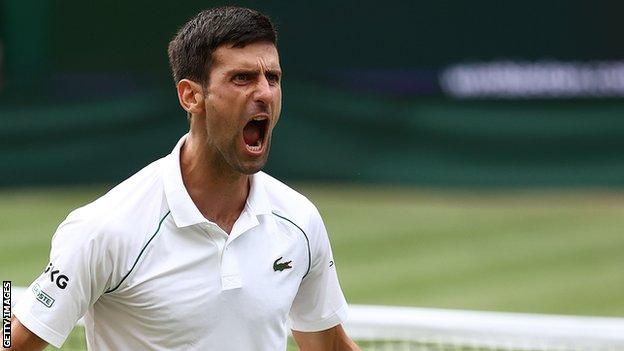 'A special Sunday for all of us Italians'

While Djokovic has only dropped one set on his way to the final, the world number one faces another man who has been in excellent form this year.

Berrettini has a 32-6 win-loss record in 2021, boosted by having won all 11 of his matches on the British grass courts.

Before coming to the All England Club, Berrettini won the title on his Queen's debut and is aiming to become the eighth player to complete the London double.

Success for Berrettini could be one half of a double sporting celebration for Italy in London, with the national football team facing England in the European Championship final at Wembley later on Sunday. 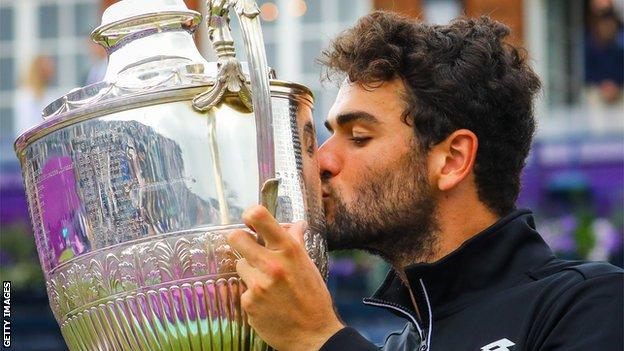 "My first final in Wimbledon, it's just crazy to think about it," said the right-hander from Rome. "I think I never dreamed about this because it was too much for a dream."

"Obviously for Italian people in general, it's going to be tough Sunday. But I think we deserve it.

"I think it's going to be a special Sunday for all of us.

"It's great day, great sport day. I'm really happy that together with football tennis is now one of the biggest sports in Italy."

Berrettini is bidding to become the first Italian man to win a Grand Slam final since Adriano Panatta succeeded at Roland Garros in 1976.

'Djokovic has embraced history and backed it up'

Djokovic has made no secret of the fact he is motivated by creating history, having already spent more weeks as world number one than any other man and now targeting the most major titles.

When Djokovic won his first major at the 2008 Australian Open, Federer – who is almost six years older than the Serb – had claimed 12 of his 20 majors.

Now, Djokovic has the opportunity to move level with Federer – and Rafael Nadal, who caught up with the Swiss at last year's French Open – for the first time.

"Obviously, Djokovic is a huge favourite against Berrettini and he seems to be able to embrace and talk about what he is trying to accomplish. That's not easy to say that and back it up," seven-time major champion John McEnroe told BBC Sport.

"Berrettini has a puncher's chance. He has a huge serve and a huge forehand, but it is about whether he can execute and take it to Djokovic enough. If he can get Djokovic on his heels often enough then it could be competitive." 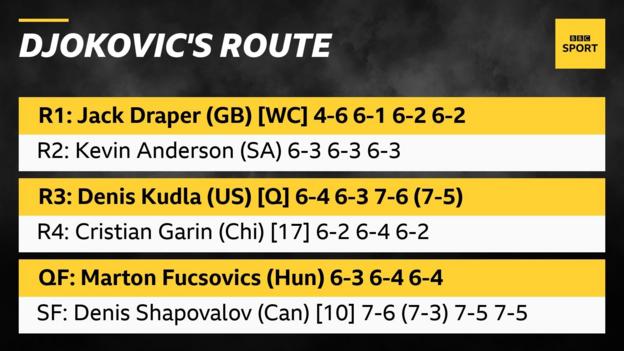 'Berrettini needs to let it all hang out'

An important factor will be whether Berrettini can handle the occasion of playing his first major final against an opponent who is taking part in his 30th.

McEnroe says the magnitude and grandeur of the occasion at Wimbledon adds an extra dimension of pressure, describing his first experience of playing in the SW19 latter stages as "knee-knocking".

On Saturday, Czech Karolina Pliskova froze in the opening stages of the women's final against Ashleigh Barty and went on to lose in three sets.

"It is going to hard for Berrettini to handle the nerves. We saw that in the women's final with Pliskova, it is tough," said McEnroe.

"But he knows his best tennis is on grass and needs to let it all hang out.

"I think he will win at least a set, but I wouldn't pick him to win the match." 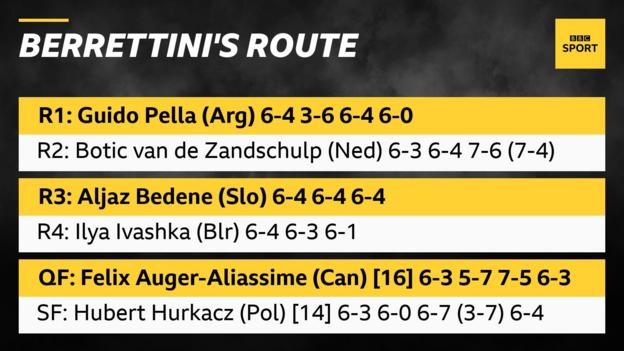