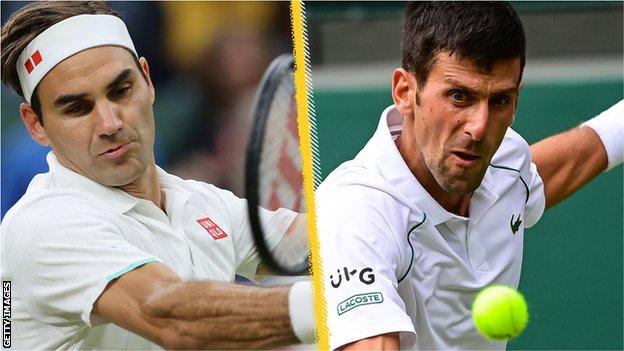 Eight-time champion Roger Federer says the Wimbledon latter stages will test how much he has "left in the tank".

"I feel like now I've had some good progress," said Federer, who is playing only his fifth event in 17 months. 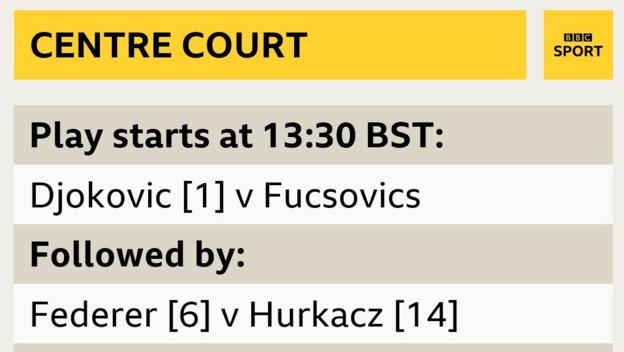 The pair will be followed by Russian 25th seed Karen Khachanov and Canadian 10th seed Denis Shapovalov – the conqueror of Britain's Andy Murray in the third round.

Djokovic and Federer, who contested the 2019 final, are split on opposite sides of the draw.

The winner of Khachanov and Shapovalov will play Djokovic or Fucsovics in Friday's semi-finals, with Federer or Hurkacz facing the victor between Berrettini and Auger-Aliassime.

None of the quarter-finalists other than Federer and Djokovic have ever reached this stage of Wimbledon before. 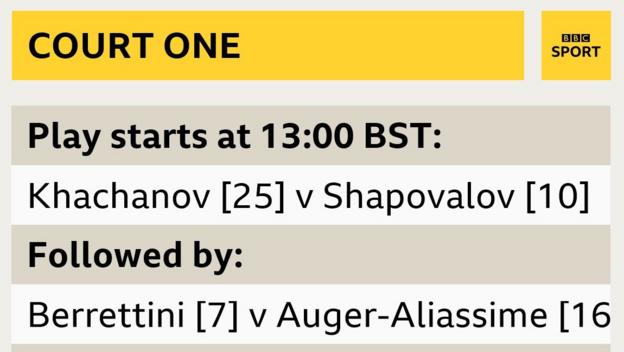 'I had question marks all over the place' – Federer

Sixth seed Federer turns 40 next month but a straight-set win against Italy's Lorenzo Sonego in the last 16 provided more evidence he is moving through the gears.

A lack of court time in the past 17 months, because of a knee injury that required two surgeries, left many wondering how the Swiss would fare this fortnight.

"When you're young, you don't ask yourself the question. But when you're me, with the year I had, it's all question marks all over the place," said Federer.

"You have to prove it again to yourself that you can actually do it.

"It's very rewarding and it's a good feeling. Now we'll see how much more I got left in the tank."

Hurkacz, seeded 14th, had never gone past the third round of a Grand Slam before this tournament, setting up a last-eight match against his childhood hero Federer after fighting back to beat Medvedev.

The 24-year-old has played Federer once before – a straight-set defeat in Indian Wells two years ago – but says he will not be intimidated by facing him on Centre Court.

"He was big inspiration for me. The success that he had, the way he played, how he plays in the important moment, it's really special," said Hurkacz.

'It's a privilege to break records' – Djokovic

Djokovic, 34, is aiming for a 20th Grand Slam men's singles title, which would equal the record jointly held by Federer and Spain's Rafael Nadal.

After already winning the Australian Open and French Open titles, the Serb is bidding to become the fifth man in history to claim the first three majors of the year.

So far at the All England Club, the two-time defending champion has dropped just one set and eased into his 50th major quarter-final with a one-sided win over Chile's Cristian Garin.

"You always enjoy obviously hearing those stats. Again, it's a privilege to break records in the sport that I truly love," said Djokovic.

"I'm devoted to this sport as much as I think anybody out there on the tour. I just try to do my best." 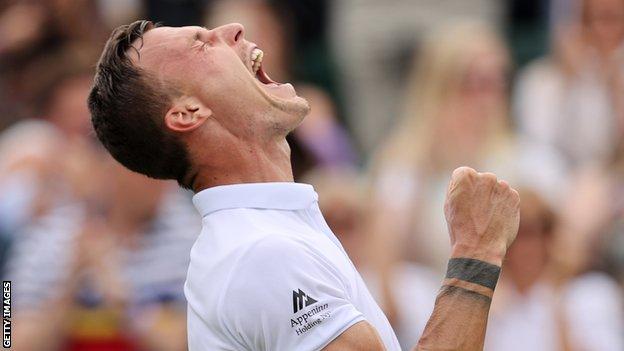 Fucsovics beat Russian fifth seed Andrey Rublev in the last 16, only his second career win over a top-10 ranked opponent

Fucsovics, 29, will contest his first Grand Slam quarter-final after having previously won just one main-draw match at Wimbledon.

"I think I will become famous now in Hungary," said the world number 48, who is the first Hungarian to reach a Wimbledon quarter-final in 63 years.

"It's a big thing, huge thing. But for the moment I'm not thinking about what will happen in Hungary, if I will be in the news or if people will talk about me."

The attention would dramatically increase if Fucsovics can beat Djokovic – and he says he "really enjoys" playing against the illustrious names. 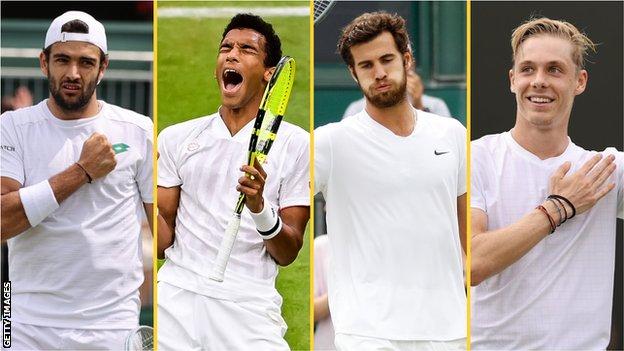 Berrettini (left) and Khachanov (second right) have both previously reached the SW19 fourth round, with Auger-Aliassime (second left) and Shapovalov (right) creating history as two Canadian men reached a Grand Slam quarter-finals for the first timeLive scores, results and order of playAlerts: Get tennis news sent to your phone
Source