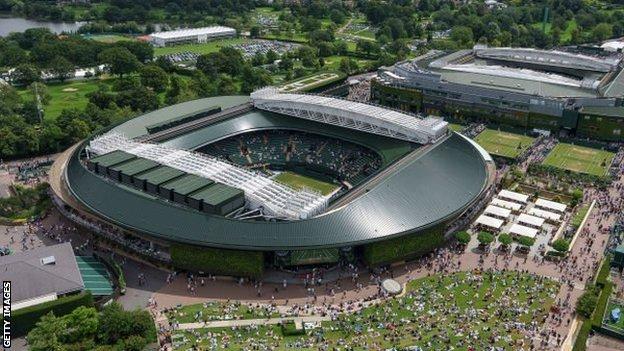 Two matches at Wimbledon this year are under investigation after "possible irregular betting patterns".

The matches, which were reported to the International Tennis Integrity Agency (ITIA), are an early-round singles match and a men's doubles contest.

On the singles match, a five-figure sum was bet at the end of the second set on the exact result.

During the doubles match, a winning bet was placed as the favourites, who eventually lost, took the first set.

It was reported in the German newspaper Die Welt that a German player was involved in the singles match in question, but was not themselves under investigation.

"Two alerts were provided to us from the betting industry indicating possible irregular betting patterns," a ITIA spokesperson told the BBC.

"It is important to note that an alert on its own is not evidence of match-fixing. Where analysis of a match alert does suggest corrupt activity, the ITIA conducts a full and confidential investigation."

In April, the ITIA banned Argentine player Franco Feitt for life after he admitted to nine incidents of match-fixingexternal-link between 2014 and 2018.