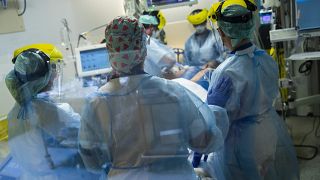 Medical staff tend to a COVID-19 patient in the intensive care ward of the Erasme hospital in Brussels, April 28, 2021.

Belgian scientists on Sunday reported that an elderly woman had died from COVID-19 after being infected with the Alpha and Beta variants at the same time.

“This is one of the first documented cases of co-infection with two variants of concern of SARS-CoV-2,” molecular biologist Anne Vankeerberghen, author of the study released by the European Congress of Clinical Microbiology and Infectious Diseases (ECCMID), said in an accompanying statement.

The 90-year-old woman died in March after being admitted to a hospital in the Belgian town of Aalst following several falls. She was not vaccinated against COVID-19 and tested positive for the disease on arrival but “a good level of oxygen saturation and no signals of respiratory distress.”

According to Dr. Vankeerberghen, “it is difficult to say whether co-infection with two variants played a role in the rapid deterioration of the patient’s condition.”

During extensive testing and sequencing, the hospital discovered that she had been infected with two variants: the Alpha, which first originated in Britain, and Beta, first detected in South Africa.

“Both variants were circulating in Belgium at the time, so it is likely that the lady was co-infected by two different people. Unfortunately, we do not know how she was infected,” Dr Vankeerberghen continued.

Both variants were first reported to the World Health Organisation in December and have since spread to more than 40 countries worldwide.

To date, “there have been no other published cases” of co-infections with two variants, Dr. Vankeerberghen noted, stressing it is “crucial” to further sequence and study a “probably underestimated” phenomenon.

Two cases of people infected with two different variants present in Brazil were reported in January in a study, which has “not yet been published by a scientific journal”, according to ECCMID.