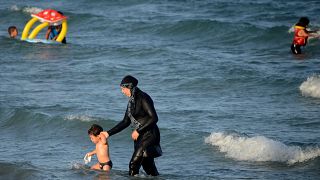 A Tunisian woman wearing a "burkini", a full-body swimsuit designed for Muslim women

Several female activists have been fined in France for wearing “burkinis” in a Grenoble swimming pool.

Five women entered the city pool to bathe on Wednesday, causing the pool to be evacuated at the request of officials, French police said.

Grenoble city hall said the activists had blocked access to the pool and were removed and banned from entering the facility for two months.

The incident comes after a tense debate between the Grenoble mayor, Éric Piolle, and the government over full-body swimming costumes.

“Burkinis” — a swimsuit that covers the whole body except the face — have been outlawed by several French municipalities since 2016, arguing the costumes violate the country’s secular values. But activists have argued that the ban is rooted in Islamophobia.

The Citizen’s Alliance stated on Twitter that seven of its activists “demand the right to choose their swimming costume: full coverage, long-sleeved, short-sleeved or even topless”.

The organisation says the current regulations are “discriminatory” and vowed to keep fighting for access to the swimming pool.

Annabelle Bretton, deputy mayor of Grenoble, said the protest and removal of activists by authorities had been done “calmly” and “without violence”.

The demonstrators were later met at Grenoble city hall after they had been handed a fine by police.

In June 2019, a dozen women supported by the Citizens’ Alliance had carried out a similar action in the same pool in Grenoble in an “act of civil disobedience”.

Last year, the city’s mayor Piolle had, in a letter to French Prime Minister Jean Castex, asked the government to decide at the national level whether or not to ban burkinis.