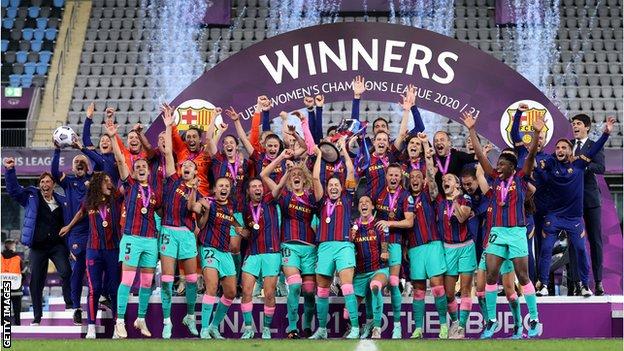 Chelsea conceded four goals in the first 36 minutes as Barcelona blew them away to win their first Women's Champions League title in Gothenburg.

Chelsea trailed 33 seconds in when an attempted clearance hit Melanie Leupolz and went in for an own goal, and Alexia Putellas' penalty made it 2-0.

Aitiana Bonmati finished an intricate move and Caroline Graham Hansen tapped in to put a rampant Barca out of sight.

Despite a spirited second-half display there was no way back for the Blues.

Barcelona become the first club to clinch both the men's and women's Champions League title, while this was the biggest ever winning margin in a women's final.

Emma Hayes' Chelsea side had hoped to add a European crown to their Women's Super League and League Cup triumphs this season, as they looked to become only the second English side in history, after Arsenal in 2007, to complete the quadruple.

It was Chelsea's first Champions League final – and the first time an English side had reached the showpiece since Arsenal lifted the trophy in 2007 – and it showed with a nervous start, and failure to turn the tide once things began to unravel.

In the first attack of the game Lieke Martens struck the bar for the Spanish champions from outside the box and from a subsequent cross Fran Kirby's attempted clearance rebounded off team-mate Leupolz and freakishly looped in over goalkeeper Ann-Katrin Berger.

Chelsea's Pernille Harder missed a golden chance to level when she shot over when unmarked from Jess Carter's deep cross, and they were punished as Leupolz caught Jennifer Hermoso with her trailing leg in the box and Putellas calmly sent Berger the wrong way from the spot.

Putellas then played a wonderful first-time pass for Bonmati to slot home a third inside 20 minutes before Martens beat Niamh Charles and showed composure to pick out Hansen for well-worked fourth goal.

Chelsea were high on endeavour after the break but failed to create any notable chances, while Barca's Asisat Oshoala had a last-gasp goal ruled out for offside.

Progress for Chelsea despite humbling defeat 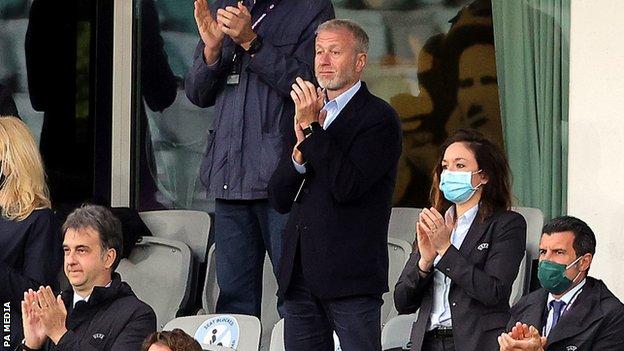 Chelsea were watched from the stands by owner Roman Abramovich, who had flown in to Gothenburg for the game

Chelsea had overcome bogey side Wolfsburg and fellow German giants Bayern Munich to reach the biggest game in club football, 14 years since an English side had last reached, and won, a European final.

Hayes' Blues had not even qualified for last year's competition and had previously twice fallen at the semi-final stage, so finishing as runners-up is a big step forward both for the club and the ever-growing profile of the WSL.

And it has been a memorable campaign which has seen them win a record fourth league crown, while they could yet add the FA Cup to their League Cup for a domestic treble.

Attacking duo Kirby and Sam Kerr have dazzled, scoring 52 goals between them this season, but they could not get a foothold in Sweden and the Australia striker was withdrawn with 20 minutes left.

And while Carter and Charles have impressed in makeshift full-back roles in recent months, they struggled against the world class wide play of a Barcelona side who have won all 26 of their domestic league matches and scored 128 goals in the process.

Barca right the wrongs of 2019 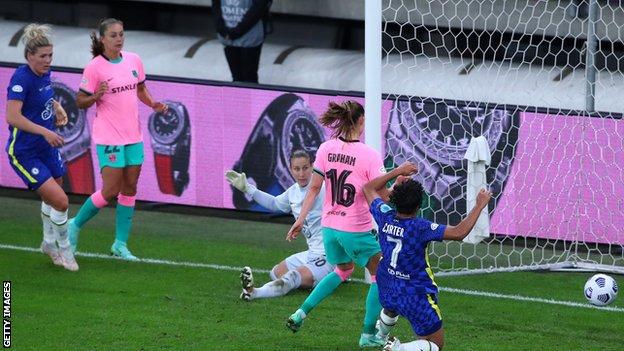 It was a second Champions League final for Barcelona and the lessons learned from their previous experience proved invaluable this time round.

Against seven-time winners Lyon in 2019 they found themselves 3-0 down inside 20 minutes before going on to lose 4-1.

Two years later and it was they who were handing out that punishment, showing that ruthless edge that Chelsea do not yet have on the highest European stage.

Barca knocked out Chelsea's biggest domestic rivals Manchester City in the quarter-finals and while the WSL now seems to be attracting the highest revenues and biggest names in Europe, this shows the level of its top clubs is still that bit below the leading one or two teams on the continent.

The Spanish side's triumph brings an end to Lyon's run of five Champions League titles in a row.