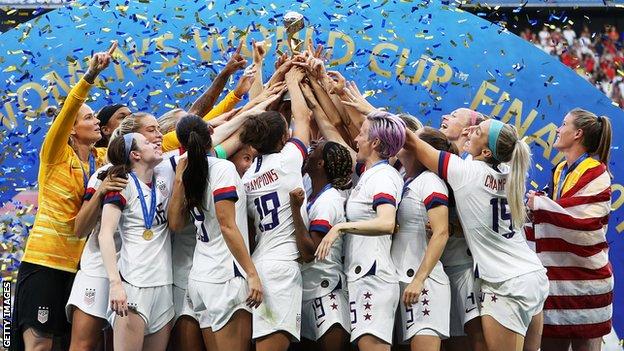 Current holders the USA qualify automatically for the tournament

England and Northern Ireland will meet in Group D of European qualifying for the 2023 World Cup, which is set to be held in Australia and New Zealand.

Scotland, who qualified for the tournament for the first time in 2019, will face Spain and Ukraine in Group B.

Northern Ireland, who made history by reaching the Euro 2022 finals, and England will also face Austria, North Macedonia, Latvia and Luxembourg.

The Republic of Ireland are in Group A and will take on Sweden, who beat England to finish third in 2019.

There are a record number of 51 entrants with matches set to be played between September 2021 and September 2022.

The finals tournament will take place between July and August 2023 and involve 32 teams, extended from 24 in 2019.

The winners of the nine qualifying groups will progress directly to the finals with the runners-up taking part in play-offs in October 2022.