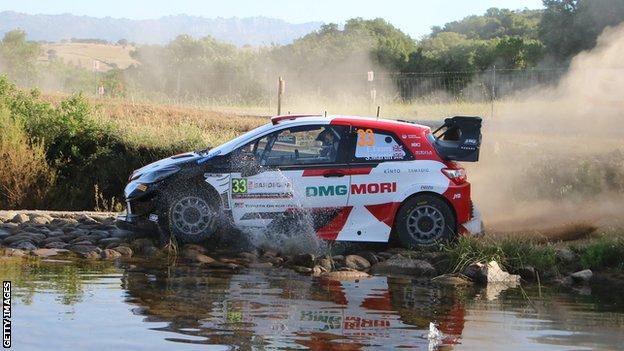 Evans won two of the final day's four stages but finished down the field on the concluding power stage, failing to pick up any championship b onus points.

Ogier was fourth on the final stage, finishing the rally 46 seconds ahead of the Welsh driver.

In the standings, the Frenchman has 106 points, with Evans second on 95.

Teammate Ott Tanak, who led before retiring on Saturday, returned to take second in the power stage and gain four consolation points, with Ogier taking two

Evans' Yaris cut out after the water splash on the final stage and he dropped nearly 20 seconds trying to restart it.

"It took in some water and took a while to clear," he said. "Thankfully we got back on four cylinders and at least we were able to continue. Not the nicest feeling.

"A great result [though]. Not the start of the weekend we wanted and that's really when the damage was done. It's been a good weekend for the team and we can be pleased about that, it's just a shame we won't have any points now in the power stage."