World Rugby has announced the introduction of Independent Concussion Consultants to support the graduated return to play process; ICCs have already been used at the 2015 and 2019 Rugby World Cups; World Rugby has also signed off on some welfare focused law trials 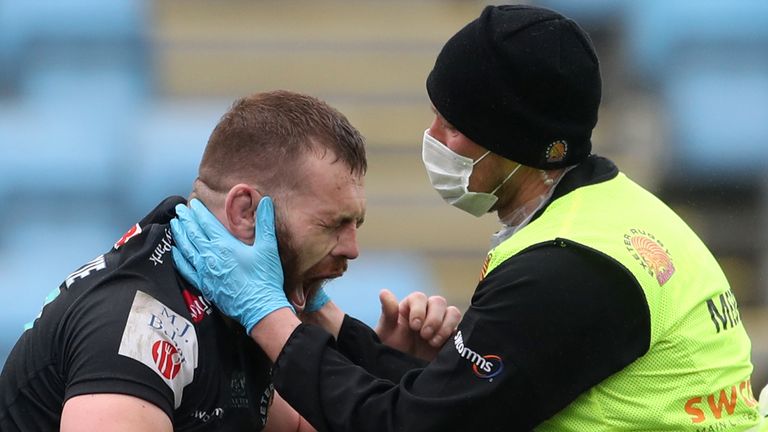 Rugby chiefs have moved to strengthen concussion protocols, with independent
specialists set to review cases when players return to action after a head
injury.

World Rugby will launch a panel of Independent Concussion Consultants (ICCs) to provide expert opinion on whether players are ready to return to action after head issues.

Global governing body World Rugby will fully fund the process for Test-level competitions, with ICCs asked to rule when players look to return to action 10 days or fewer after a concussion, or on players deemed higher risk due to previous head injury history.

“This will become an integral part of the graduated return to play process for the elite game,” said World Rugby’s chief medical officer Dr Eanna Falvey.

“But we consulted with our concussion working group and we had a significant review process of what we could do to strengthen the graduated return to play. And the addition of the ICC was seen as the best option.”

Dr Falvey revealed the British and Irish Lions have worked in conjunction with World Rugby to use ICCs on their current tour of South Africa.

England hooker Luke Cowan-Dickie featured in the Lions’ opening tour match in South Africa, a week after being knocked out in Exeter’s Gallagher Premiership final defeat by Harlequins.

Dr Falvey has now explained that an ICC was used to review the case, with World Rugby happy with the whole process of Cowan-Dickie’s return to action.

“I’m well aware of the case, very happy that the entire process was managed optimally from a medical point of view,” said Falvey.

“As an extra measure for the Lions tour, we have helped the Lions to usher in the use of ICCs.”

World Rugby has also signed off on welfare-focused law trials, that will come into effect globally from August 1.

The 50/22 law will come into action, with attacking teams winning a lineout by punting the ball from their own half and out on the bounce in the opponent’s 22.

The goalline drop-out will replace five-metre scrums when a player is held up over the tryline.

A pre-binding pod of three or more players will be outlawed, and sanctioned with a penalty.

Players will be penalised for dropping their weight onto lower limbs of a defender attempting a tackle.