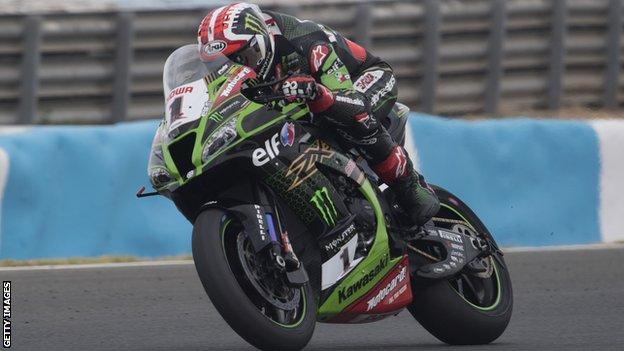 Jonathan Rea took a thrilling win in race two at the World Superbike round at Aragon to increase his lead over championship rival Scott Redding.

The five-time world champion battled with Redding in the early stages and later fought off the challenge of Michael Ruben Rinaldi, who was second.

Rea's eighth win of the season takes his overall tally to 96 WSB successes.

The Northern Irishman started second on the grid but was quickest off line to take the early lead, only for Redding to execute a daring passing manoeuvre on the first lap.

A no-holds-barred dice ensued, with Rinaldi getting in on the action on the sixth lap, taking advantage of the dual in front of him by taking over at the front when Rea and Redding both went wide at Turn 8.

The Italian passed both previous frontrunners but Rea managed to regain top spot three laps from the end and maintain his lead to the line, winning by 1.2 seconds.

Rea survived a couple of big moments during the race, making a superb save after running wide while trying to pass Rinaldi and also another save at Turn 1 shortly after passing Rinaldi.

Redding overtook Rea on the opening lap and was never headed as he ended his title rival's run of four Superpole wins this season and five in total.

Redding had lost ground in the battle for the title when he crashed out in the first race of the weekend, won by the ever-improving Ruben Rinaldi.

The GoEleven Ducati rider's triumph on Saturday was the first of his World Superbike career – and also his maiden podium.

Three rounds of the series remaining, with the next event at Catalunya on 18-20 September.