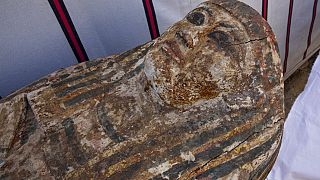 The first-ever Egyptian mummy of a young pregnant woman has been discovered by scientists from Warsaw University.

The discovery was made as part of the Warsaw Mummy Project of Warsaw University, where the research has been underway since 2015.

During the research, scientists performed a total of 250,000 CT scans.

The mummy of the pregnant woman was the last of the analyzed mummies and the discovery extended the research period.

Meanwhile, scientists kept information about the discovery secret even from close family members.

“This mummy has already changed sex three times, because when she came to Warsaw in 1826, it was originally thought that it was a female mummy,” Dr. Wojciech Ejsmond, an archaeologist from the Polish Academy of Sciences told Polish private broadcaster TVN24.

“Then, in the 1920s, a hieroglyphic inscription was read on the sarcophagus, where it was written that it was a mummy of a man, a priest named Hor-Jehuti, who lived in the 1st century BC,” Dr. Ejsmond added.

In 2016, the experts from the Warsaw Mummy Project found out that the mummy attributed to the priest Hor-Djehuti in fact conceals a woman’s body.

It was possible thanks to the use of a modern CT scanner, because the mummy is still complete – bandages were not taken down for research purposes.

Eventually, it was possible to see the entire fetus in more detail.

“When we saw what is in the smaller pelvis, what it looks like and we started to suspect that it might be a fetus, it was really a huge surprise for us, but also a great happiness, because we knew it was unique, that there was no (second) such mummy,” Marzena Ozarek-Szilke, coordinator of the Warsaw Mummy Project told TVN24.

For now, it has been established that the fetus is curled in the embryonic position. Its gender is unknown.

Scientists plan to conduct additional studies on the mummy of a pregnant woman. So far, non-invasive tests involving CT scans and X-rays have been carried out.

In the next stages, scientists plan to take micro-samples not to damage the mummy, but to get to know more about the ancient Egyptian culture and understand the cause of the woman’s death.

Previous studies have not established what caused her death.

Scientists plan to collect remnants of the woman’s blood. They are hopeful that their research will be able to get more answers about the mysterious mummy, because of the good condition of the remains.

“She was very well mummified. The condition of the mummy itself is very good, the mummification method was very good. It was definitely the mummy of a rich person,” said Ozarek-Szilke.