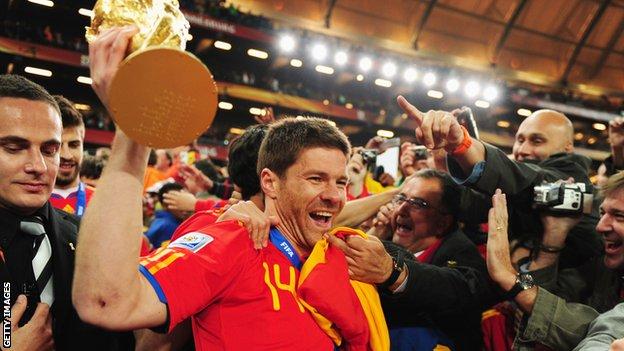 Alonso won the World Cup with Spain in 2010

Xabi Alonso has had an offer to take over as Borussia Monchengladbach's new manager, but a decision has not yet been made, says Spanish football expert Guillem Balague.

Bild has reportedexternal-link that Alonso, 39, will replace Marco Rose, who is to leave in the summer to take over at Bundesliga rivals Borussia Dortmund.

Alonso is currently manager of La Liga side Real Sociedad's B team. and Balague says the World Cup winner could stay and take over the senior team if that role becomes available.

He also says the Gladbach offer is one of many on the table and the former Liverpool midfielder is not in a rush to make the next step in his coaching career.

He also won the Champions League with Liverpool and Real Madrid before finishing his playing career with Bayern Munich in 2017.

On the coaching front, Alonso led Real Madrid Under-13s to a league title before joining his former club Real Sociedad's B team in 2019 – managing in Spain's third tier.