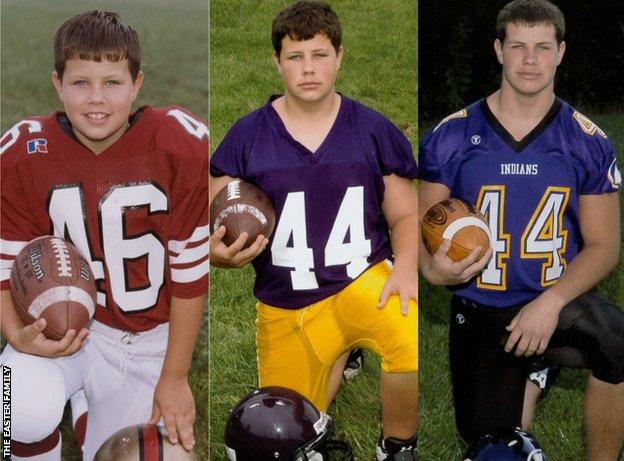 Warning: This article includes references to upsetting themes, including suicide.

Zac Easter was always the toughest tackler for his team, just like his NFL heroes.

He was the linebacker who used his head as a battering ram, dominating opponents and setting the aggressive tone in defence. To his mother, he was an "all-American kid"; a grade-A student at school, 'solider of the year' at his national guard volunteer group, and a huge sports fan.

American Football, along with farming and hunting, was an important part of the Easter family identity, a passion passed down through the generations who'd made their part of rural Iowa – Indianola – home many years ago.

Zac started playing from the age of eight, but the game he loved would seriously damage his health, and ultimately lead to his death.

The symptoms first showed at age 11, when he began experiencing headaches and a sensitivity to light. Doctors attributed it to 'hormones' at the time.

Over the following decade, those symptoms would become much worse.

"Memory loss, blurred vision, slurred speech. He would be talking and all of a sudden what was coming out of his mouth made no sense," says Zac's mother, Brenda.

"It's not what a normal 21-year-old does. I remember him coming down for dinner and he just said: 'mom, there's no hope for me. I want my brain donated to science.'

"I remember saying: 'Don't give up hope Zac, we'll find a cure.' He just replied: 'It's not gonna happen.' He had hit his breaking point."

A week before Christmas 2015, at the age of 24, Zac shot himself in the chest with his father's hunting gun. The 39-page journal he left behind detailed the reason why – so his brain could be donated for research.

In page after page he catalogued how concussions sustained from his time as a high school football player had led to depression, mood swings, drug dependency, confusion, isolation and inescapable short-term memory loss.

Zac was specific in the last note he left for his family: let others know about me, so they can avoid my fate.

His is a story so powerful that it changed the life of the man who came to tell it, too.

Reid Forgrave first learnt about Zac when he read the obituary in The Des Moines Register,external-link a newspaper in Iowa.

A journalist and author, Forgrave was "floored" by the symptoms suffered by someone so young and drawn to the diary he'd left behind.

A few weeks after Zac's funeral, he found himself sitting in the Easter family home, talking over memories above a familiar backdrop.

"I distinctly remember the NFL game between the Minnesota Vikings and the Green Bay Packers was on the TV the whole time," Forgrave says of that first visit.

"It's just so American, [our] capacity for cognitive dissonance. If it's something that we love, we can look past the evils because we love it."

He left that day knowing the short story he'd anticipated writing up for a website was, in fact, book-worthy.

"I mean, I'd never written a book before but I felt I had Zac's legacy in my hands," he says. "It was a great burden to me."

In Love, Zac Forgrave details how his post mortem diagnosed chronic traumatic encephalopathy (CTE), the neurodegenerative condition linked to repeated blows to the head and/or concussion.

CTE tends to develop over several years, with symptoms similar to Alzheimer's disease, and can so far only be detected after death.

But even before he died, Zac had worked it out. 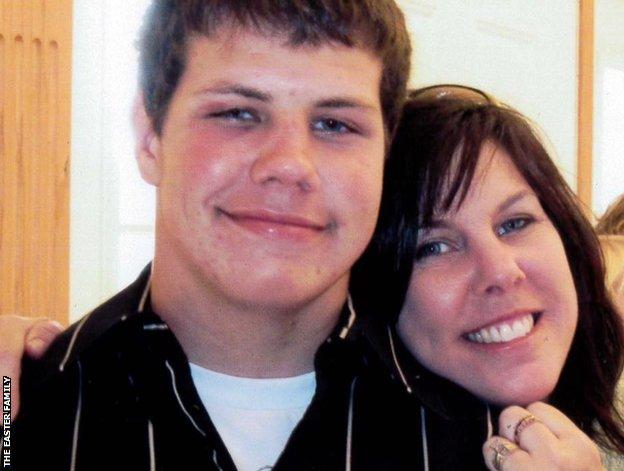 Zac pictured with his mother Brenda

He'd read the headlines in 2012 of the NFL's $1bn settlement with 5,000 former players suffering dementia-like symptoms.

He'd watched documentaries profiling the suicides of NFL Hall-of-Famers like Mike Webster, Junior Seau and Dave Duerson; each shooting themselves in the chest to preserve their collapsing minds for research.

He was aware too, of the work of Dr Bennet Omalu, a forensic pathologist who linked CTE to American football for the first time in 2005. Will Smith would star in a film based on Omalu's story called 'Concussion' in 2015.

But beyond the connection with his journal, Zac kept his suffering secret – year after year, season after season.

Through college, with his high school playing days behind him, he self-medicated his problems, becoming dependent on drugs and alcohol. As his condition worsened it became harder and harder to keep up appearances.

He worked at a financial firm after graduating, cold-calling to sell insurance, but it was a struggle. Work-mates noticed that he could not get through a simple call without the use of a hand-written script to follow.

In the spring of 2015, Zac did eventually open up to his girlfriend. He started taking professional help, but one psychologist told him he would end up penniless, homeless and in a mental institution. Not could, as Forgrave underlines in his book. Would.

Not all of those asked to help were so fatalistic but, even so, Zac became increasingly convinced his condition was untreatable and degenerative.

He finally told his disbelieving family about his condition at a dinner convened to celebrate his 24th birthday. It took place just six months before his death.

"I think he was afraid of expressing himself," Forgrave says. "That pressure to be that stoic, tough American man, hiding his struggles.

"We have a phrase: 'Rub dirt in it and take a lap.' Basically, if you're injured, tough cookies, kid. I think we value that in masculine sports, we value fighting through physical pain.

"It's the stereotypical American spirit, right? Like, we're fighters, we shall fight on. It's the toxic parts of masculinity that can come with [American] football culture."

Listen: The brain that changed a sport 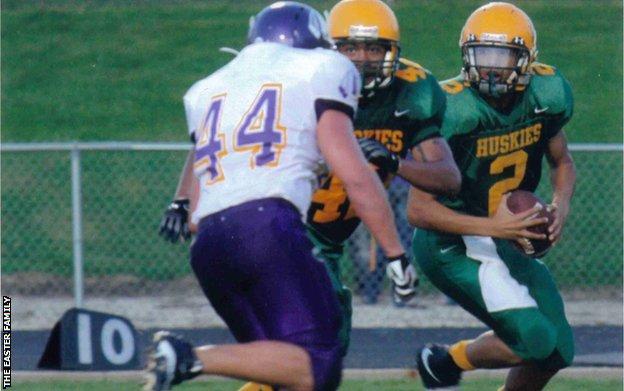 Initially, Zac's brothers and parents found the revelation hard to square with the impenetrable jock image he'd worked so hard to cultivate. He came from a long line of Easter men, after all.

Despite blurred vision and numb fingers from the blows to his head, he'd grown up arguing his way back onto the field to finish the game with his team-mates. That's what the best players did.

But as his heavy drinking and drug dependency increased, their concern heightened.

On 30 June, 2015 Zac wrote in his journal that he had "quite a few thoughts of suicide over the past week".

But he added: "I'm not giving up and I know God is still on my side watching my back, [not] letting my mind slip into temptation."

Within a month, his writing told of frustrations turning to despair.

"I got put on Zoloft [an antidepressant] and my new psychiatrist seems to know his meds, still fighting the side effects. Sleep has been dismal and I've still been going to speech therapy."

He described how he had really struggled with depression in the previous weeks, adding: "Smoked pot a few times, rolled on Molly (MDMA) and now I got some coke. All that plus Adderall. It's the only way I feel normal. I'm just sick of living life how I'm living." 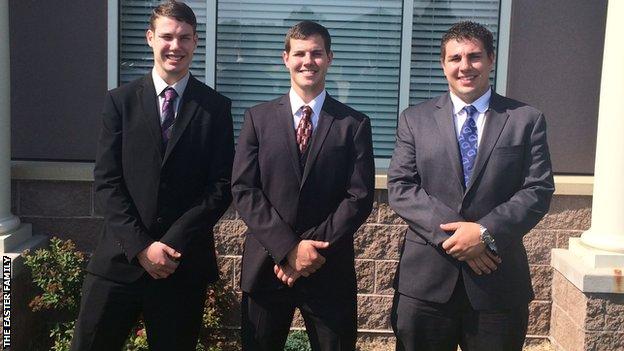 The first attempt at suicide came a few months later, in November 2015.

His father found him, thanks to one of Zac's Facebook posts and the advice of frantic friends, in a fishing hut at the shore of a local lake, gun in hand.

On that day, Myles Easter Sr told his desperate son: "I don't know what's going on, but we'll get this figured out. We gotta get through this part right now."

Zac handed over the gun before an ambulance drove him to a psychiatric hospital. It wasn't easy for either man to come to terms with what had happened.

The silent stoicism that saw their ancestors work the land through the brutal Midwest winters, survive the Civil War and tough out the Great Depression was now a hindrance to the latest generation of Easter men.

Forgrave doesn't see fault in either, seeing each as a product of their culture.

And in many ways, though American football can reinforce many of these potentially 'toxic' attributes, the sport had been central to some of their greatest moments of togetherness.

As Forgrave puts it, in the last chapter of his book: "Zac knew he had CTE. He knew before the doctors did. And he blamed football and the concussions he suffered while playing the sport.

"At times, he hated everything about the sport. At times, though, he loved the sport as much as just about anything in his life.

"Even after the suicide attempt that landed him in the psych ward, there Zac was, sitting in his parents' basement on Thanksgiving night, watching his beloved Green Bay Packers."

Watching the game may have provided short-term relief to Zac, but it wouldn't last long.

There were no posts to social media this time, just a final note written to his family and left in his bedroom.

"Please! Look on my computer and print off my story. Please fulfil my last wishes! Thank you all for wanting to help. But I can't be helped. Love Zac."

Following Zac's death, in December 2015, his family formed a charity called CTE Hope,external-link committed to raising awareness as well as searching for a way to diagnose it in the living.

His CTE diagnosis was confirmed five months after his death by Bennet Omalu, the same pathologist who'd studied Mike Webster's brain and campaigned so hard for the condition to be recognized.

American football was noted as a potential cause.

By now, Brenda had read the Harvard study that showed the average professional American football player had a life expectancy 20 years short of the national average.

She'd seen the findings of a study by the University of Michigan that found retired football players had 20 times the normal rate of Alzheimer's disease for men aged 30 to 49.

For Brenda, it all amounted the same thing: the message left to her by Zac for the world was not only simple but vital to spread: A concussion is a traumatic brain injury.

"Parents need to listen up," she says. "As much as it's important for them to allow kids to do the things that they truly are passionate about … if they're playing any of the collision sports, they need to be very mindful of the risk.

"And [if symptoms surface] to say, listen, my son's long-term health is more important, he's not going back to play. And that's bravery, from a parent's perspective."

As a parent, Myles and Brenda's message resonates with Forgrave.

"I grew up a huge football fan. I have two young boys. I would hear Brenda talk about Zac and I would see so much of him in my four-year-old: he has this wild devious streak, he throws caution to the wind.

"And I wonder, what happens a decade from now when my son wants to play football? My wife and I talked about it and we say no, of course not. Why would we risk that?

"But there's something really powerful to boys about the idea of turning into men on a football field, as cliched as it sounds. And that means it becomes a much more complicated question for parents.

"So we'd love him to play another sport instead, soccer or track and field, but we want him to make that decision on his own, eyes wide open.

"And we're gonna watch him like a hawk. If he gets a concussion, that might, you know, end his football career right there."

If you've been affected by issues raised in this article, there is information and support available on BBC Action Line.