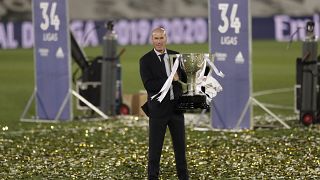 “Real Madrid CF announces that Zinedine Zidane has decided to end his current stage as coach of our club,” read the statement.

“It is now time to respect his decision and show him our appreciation for his professionalism, dedication and passion in all these years, and for what his figure represents for Real Madrid.

“Zidane is one of the great myths of Real Madrid and his legend goes beyond what he has been as a coach and player of our club.

“He knows that he is at the heart of Real Madrid and that Real Madrid is and will always be his home.”

No detail was given to explain the parting. His contract ran through June 2022.

He announced his resignation in May 2018 but returned less than a year later after the club’s fortune dipped.

Forward Karim Benzema paid tribute to Zidane’s leadership on Twitter, writing: “Thank you brother, for everything you have given me.”

“I am proud and honoured to have been able to progress and grow alongside a man like you,” he added.

Defender Raphael Varane wrote in an Instagram post, that Zidane has been his “mentor” and that he had “helped me develop as a player and as a man”.

“I can’t thank you enough for all the advice you gave me, both on and off the field,” he added.

Goalkeeper Thibaut Courtois also thanked Zidane “for what you taught me, for the confidence you have always had in me and for what we have won together”.

“It has been an honour to have a legend like you as my coach,” he wrote on Twitter.